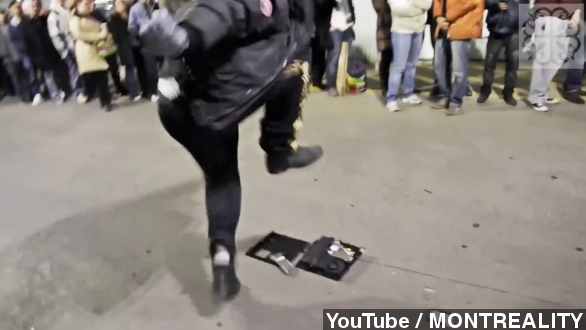 Stores in the U.S. and Canada are sold out of Playstation 4's, with 1 million systems sold in 24 hours. But some new owners seem to be taking their Playstation possessions for granted.

Why not take a bat to the PS4 you've waited forever for?

Or the more primitive version of a bat...a stick?

And another YouTube user — explosive. He microwaved his PS4.

"Also want to make sure it's turned on while it's being microwaved."

But perhaps the most awful annihilation — taking a PS4 out in front of the hardcore gamers who have been waiting for it in line.

If this video is to be believed — a new owner of a new PS4 smashed it to bits in front of a line full of fans looking to get their hands on the system.

Tech site Tom's Hardware is confused by the trend —

But it's making headlines. And yes, the big question is — why?

Ultimately, it's unclear — are these rabid XBox fans? Are they pranks?

Is this just about taking milk gallon smashing to the next level?

We may never know — but if you're looking to get your hands on a PS4 — for smashing purposes or not, you can get them on ebay.

Just make sure it's all in one piece.