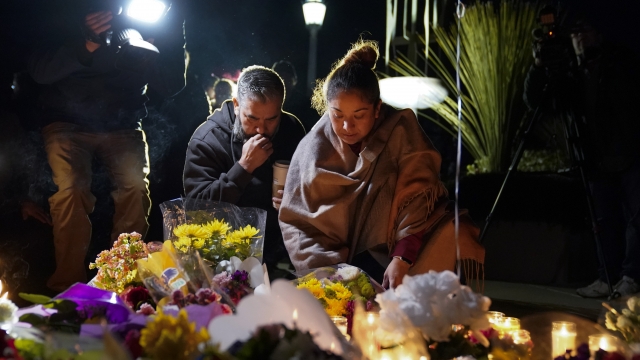 In Monterey Park, California, the community is dealing with trauma after the mass shooting that happened this weekend. Citizens are left picking up the pieces.

About a hundred people gathered in Monterey Park City Hall to remember the 11 who died and nine who were injured in the shooting, which interrupted what was supposed to be a happy Lunar New Year celebration.

This weekend turned the American dream into a nightmare of gun violence for one of the organizers of the vigil, Ann Lou.

"They need to know that this is not normal. This cannot be normal. It will not be normal," Lou said. "We are American. We are part of this culture. And it just — it just affected me to the core. I have never really came, experienced that type of emotions."

Even though the suspected shooter took his life, others in the community are still shaken and afraid.

"To be honest, I am scared to be here. There's a huge part of me that wants to run in the other direction. So what brings me out, first and foremost, is I feel an appalling need to be here to remember and honor all of the lives that were lived," said Christina Kataoka, who attended the vigil.

"It's very heartbreaking because I know they just do something they feel fun and love and second chance of their life," said Chen.

Congresswoman Judy Chu, who served as mayor of the city three times, urged the community to donate to the victims via GoFundMe.

The tragedy is bringing the whole community together, not just the Asian Americans who make up a majority in that suburb of Los Angeles.

The community is standing united, remembering the people they lost — leaving three handwritten words to the victims: "dance in heaven."