'Peter Pan Live!' Airs Next Week: Here's What To Expect 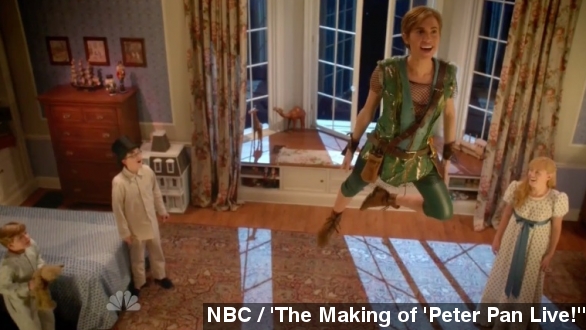 Well, the stage is set for another live musical broadcast. On NBC’s “The Making of ‘Peter Pan Live!,” we got a sneak peek into what to expect from next week’s highly-anticipated performance.

That’s a bit of an understatement. We’re sure you’ve heard of it by now. But, in case you haven’t, actor Allison Williams — daughter of NBC News anchor Brian Williams — will play Peter Pan opposite Christopher Walken as Hook.

"Guess what? I’ve got a fever, and the only prescription is more cowbell?," said Christopher Walken on NBC’s “Saturday Night Live.”

You can also expect new songs, including a new theme for “Hook,” lots of dancing and as much Neverland as you can handle.

Of course, Pan has some grown-up size shoes for its live event.

But, as Variety notes, this is a different beast altogether, because a lot of special effects are required — mainly, Pan’s gonna need a lot more than Tink’s fairy dust to take flight. The President of NBC News’ Peacock Productions — the network branch running the show — is quoted saying, “This is a little different. There’s a little twist on it. There’s a lot riding on the technology.”

So, let’s all think happy thoughts that things go according to plan.

Plus, come on, who doesn’t want to see Christopher Walken tap dancing in a pirate costume? (Video via Skint Record / 'Weapon of Choice')