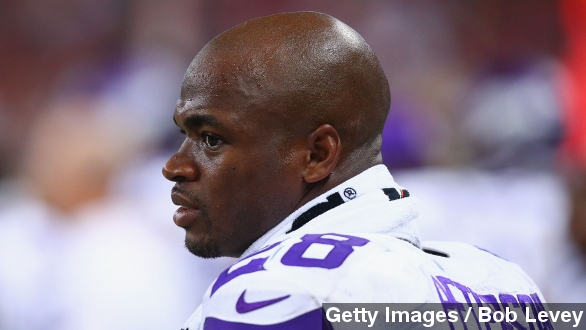 An arbitrator upheld the Peterson's suspension by the NFL, possibly keeping him sidelined until April 2015.

Adrian Peterson won’t be seeing an NFL field for the rest of 2014. An arbitrator upheld the NFL’s suspension of the Minnesota Vikings running back Friday. Peterson won’t be eligible for reinstatement until April 2015.

In his decision, arbitrator Harold Henderson, refuted Peterson’s claim that his punishment was unfair saying, “He was afforded all the protections and rights to which he is entitled, and I find no basis to vacate or reduce the discipline.” Henderson added, “His public comments do not reflect remorse or appreciation for the seriousness of his actions.”

That lack of remorse comment was one of the same reasons NFL Commissioner Roger Goodell initially chose to suspend Peterson for the remainder of the 2014 season. Peterson and his representatives, on the other hand, claim that the running back was punished twice by the league for the same offense.

The 29-year-old Vikings running back was arrested on felony charges for reckless or negligent injury to a child after allegedly hitting his 4-year-old son with a switch — or small tree branch — in September. (Video via ESPN)

The NFL Players Association released a statement Friday saying Henderson’s decision wasn’t surprising — given his ties to the NFL — and it further represents Goodell’s inconsistent punishment of players.

According to The New York Times, Peterson could sue the NFL in federal court to “dispute Henderson’s neutrality.” Success on that front could see Peterson being reinstated before April.