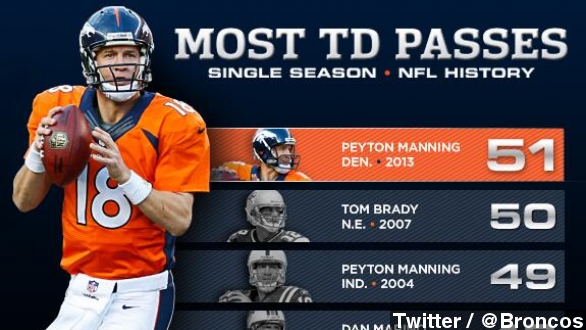 Peyton Manning threw his 51st touchdown pass Sunday to reclaim the title of most passing touchdowns in a single season.

In one of the best seasons ever by an NFL quarterback, Peyton Manning is now once again the record holder for the most touchdown passes in a single season.

"Manning to Julius Thomas, 25-yard touchdown, Manning's 51st pass touchdown this season — a new NFL record." Earlier in the game he'd tied the previous record of 50 with a TD pass to Eric Decker. (Via Fox Sports)

Manning now reclaims the record from previous holder Tom Brady, who threw 50 TD passes in 2007. That had topped Manning's previous record of 48 passes in 2004. (Via Twitter / @Broncos)

So Manning recapturing the title comes as no surprise — even to an opponent's interim head coach.

Wade Phillips of the Texans said last week that Manning was having "just the best year ever of any quarterback." (Via CNN)

Manning threw for four touchdown passes Sunday. The Broncos will play the Raiders next week in their last regular season game. It's unclear, with Denver already locked into the playoffs, if Manning will play next week and have a chance to extend his record.