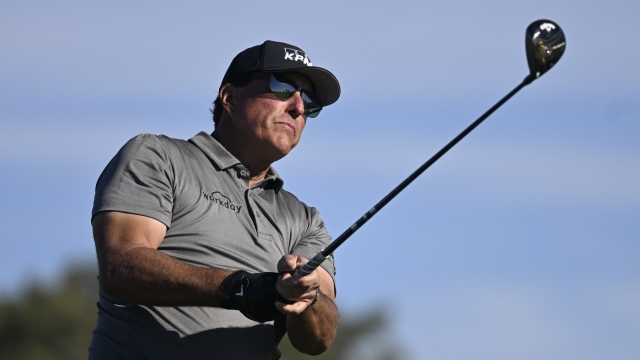 The battle between the two tours has been brewing for months and has left players divided over the topic of pay.

As the first ever LIV Golf Invitational tees off London, the PGA Tour has announced it's suspending 17 players who have decided to participate in the Saudi-backed tournament this weekend.

In a memo to PGA Tour members Thursday, commissioner Jay Monahan announced that these players, including big names like Phil Mickelson, Dustin Johnson and Sergio Garcia, are "no longer eligible to participate in PGA tour tournament play, including the President's Cup." Monahan says any other PGA Tour players who consider competing in LIV golf events will also face suspension.

This move by the PGA Tour follows the resignation from the tour by several players on the list – including Dustin Johnson and Lee Westwood. Speaking to press Thursday, Phil Mickelson defended his decision to play in the LIV events.

"This is an opportunity that allows me to still have golf in my life, but also have a balance where I can be more present, I can be more engaged with the people I really care about," he said.

The battle between the two tours has been brewing for months and has left players divided over the topic of pay. The LIV Golf Invitational Series is sponsored by the financial arm of the Saudi Arabian government. In March, the company announced plans for an eight-tournament series this year, with more than $250 million in prize money at stake for teams and individuals.

For comparison, the largest purse on the PGA Tour is the Player's Championship at $20 million.

But it isn't just money that has golfers divided over the two tours. The Saudi government's longstanding track record of human rights violations, including the murder of journalist Jamal Khashoggi and allegations of sportwashing, has sparked controversy.

"I don't condone human rights violations," Mickelson said. "I don't know how I can be any more clear. I understand your question, but again, I love this game of golf. I've seen the good that it's done, and I see the opportunity for LIV Golf to do a lot of good for the game throughout the world, and I'm excited to be a part of this opportunity."

Mickelson's initial reason for wanting to leave the PGA Tour is that he — and some other players — say it doesn't share the wealth as much as it should.

That includes excluding players from owning video highlights of their shots.

"I know that it gives me a lot of positives personally and professionally, and I believe it does the same for everyone else in the field," Mickelson continued.

Some golfers, like Rory McIlroy, are expressing concern that division of these two tours will "fracture the game" of golf.

Commissioner Jay Monahan says even if players resigned their membership, they are not eligible as nonmembers to get sponsor exemptions to tournaments.