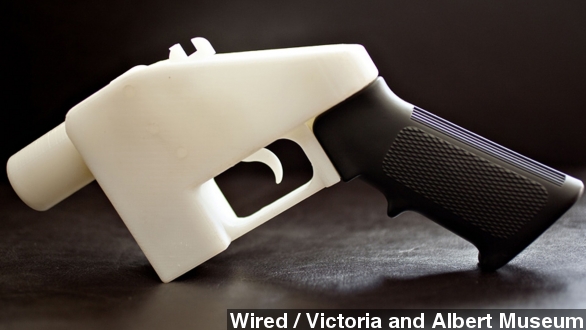 Philadelphia's City Council has voted unanimously to ban anyone but gun manufacturers from printing 3D guns.

Philadelphia's City Council has voted unanimously to ban anyone but gun manufacturers from printing 3D guns.

The Philadelphia measure would ban anyone but licensed gun manufacturers from making 3D guns. (Via CNN)

Philadelphia's WCAU pointed out Mayor Michael Nutter hadn't signed it into law as of Friday. Still, the move takes Philly one step closer.

Then again, a city council member's legislation director told Philadelphia Magazine so far there hasn't been any concrete evidence of 3D gun printing in the city: "It's all pre-emptive. ... It's just based upon internet stuff out there."

And at least one federal lawmaker is hoping for a similar federal ban.

New York Democrat Sen. Charles Schumer has called for a renewal of the current ban on undetectable firearms— largely because of safety concerns. (Via New York Daily News)

This involves guns made of mostly plastic that can potentially go undetected through metal scanners. (Via News 12 Long Island)

That law is the Undetectable Firearms Act. It was first passed in 1988 and was renewed in both 1998 and 2003. Schumer says a renewal now is even more pressing since anyone with about $1,000 for a 3D printer can make a gun of their own. (Via USA Today)

Even with such a ban, ABC points out some bullets might not have enough metal to set off the detectors. Israeli reporters were able to successfully make it past security and sit just feet away from a world leader.

THOMAS: "An Israeli TV station made a plastic gun and was able to smuggle it right past security into a room with Prime Minister Netanyahu. Look at that. Gun and prime minister only feet away." (Via ABC)

This as a national debate continues over laws dealing with conventional guns. Data from the National Institute of Justice shows nonfatal gun incidents fell sharply from more than 1.2 million in 1993 to about 415,000 in 2011. Still, FBI data shows almost 70 percent of homicides are carried out with guns.

Lawmakers in other states like New York and California have proposed bans related to 3D guns, but if Philadelphia's mayor moves forward with signing the bill, it will be the first city in the country to ban anyone but gunmakers from printing them. (Via CNET)