Philae's Power Loss Puts It Down ... But Not Out 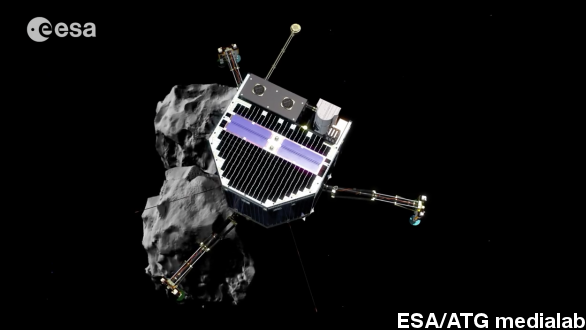 The first human probe to land on a comet went dark Friday night while sending data back to the European Space Agency. But it could soon regain power.

After making probably the greatest landing since the movie “Flight,” spacecraft Philae is dealing with a whole new challenge — one that could keep scientists from examining possibly billions-of-years-old material from Comet 67P/C-G.

Philae ran out of battery life Friday evening, as European Space Agency scientists predicted. The spacecraft was in the process of transmitting data from a dig back to the ESA.

In a statement that reads like a pseudo-eulogy, the head of operations for Philae said, “This machine performed magnificently under tough conditions, and we can be fully proud of the incredible scientific success Philae has delivered.”

Scientists knew there could be trouble after Philae bounced, then landed in a shady area of the comet. As of Friday morning, ESA scientists still weren’t exactly sure where the spacecraft was.

Philae does have solar panels so it can regain power, but it needs sunlight for that — and its current positioning apparently isn’t ideal. (Video via ESA/Rosetta/MPS)

But before going dark, the lander did manage to send back some data — Philae’s operation head told The Guardian the agency’s accomplished about 80 percent of the observations they were hoping to get out of the mission.

And we’ll definitely give kudos to the Rosetta team and Philae for snagging some dope pictures of the comet, so far.

But it’s not over just yet! ESA scientists say their next chance to communicate with Philae is Saturday morning.