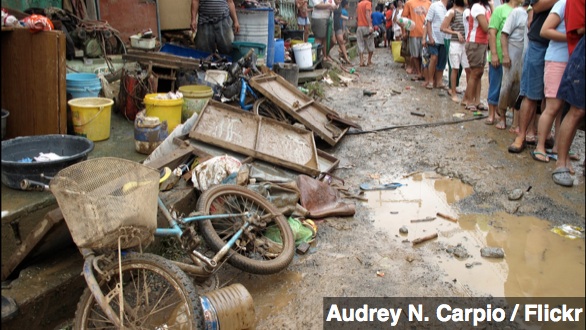 A week after Typhoon Haiyan, the Philippine government is defending itself after coming under scrutiny for some say has been a slow relief response.

It's been about a week since the immensely powerful Typhoon Haiyan hit landfall in the Philippines, killing thousands of people and displacing thousands more.

And now, the country's government is defending itself after coming under fire for what some say has been a slow response to the disaster. (Via ITN)

Under criticism for the slow pace of its relief effort following Haiyan, the Philippine government is insisting it is doing quote "quite well" in its response to the chaos and devastation ... (Via Euronews)

On Friday, the Philippine interior secretary acknowledged the difficulty of the situation but defended the government response, saying:

"In a situation like this, nothing is fast enough .... The need is massive, the need is immediate, and you can't reach everyone." ​(Via Los Angeles Times)

The government response comes after days of scrutinizing reports by international media outlets. Reporting from the ground, CNN's Anderson Cooper called the conditions in Tacloban City as a quote "miserable, miserable situation."

“You would expect perhaps to see a feeding center that had been set up 5 days after the storm. We haven’t seen that, certainly not in this area ... it’s not clear how much longer it can continue like this. Something’s got to give."

He compared the Philippine government response to that of the Japanese government in 2011 — suggesting the latter had been much better prepared. (Via RT)

But the BBC reports on Friday there was a "dramatic change" in the Philippines after a surge of international aid made its way to land and began passing out food, providing shelter and removing the dead.

The death toll from Haiyan has been a widely disputed subject, but a Philippine disaster relief official announced Friday the number has risen to more than 3,600 — a jump of more than a thousand since the previous count.

The UN has put its estimated death toll at more than 4,400. Some reports say the final tally from the disaster may amount to more than 10,000, a number the Philippine government has called "exaggerated."