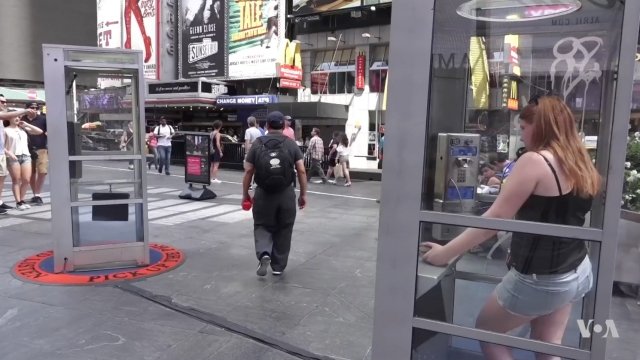 The art installation is outside in New York City's Times Square.

This phone booth doesn't make outgoing calls, but it does receive them. And if you pick up, an immigrant tells his or her story.

"I arrived as an undocumented immigrant," a Mexican immigrant said. "I made it my mission to transform the lives of undocumented students, to leaders and role models."

The repurposed booths are an art installation in New York's Times Square.

A CNN/ORC International poll found many Americans don't think deportation should be a top priority.

The artist behind the project wanted immigrant voices to be heard. His own parents came to the U.S. from Afghanistan.

"People moving across borders, people coming to the United States, people wanting to settle here and to make a better life for themselves shouldn't be something that's feared," artist Aman Mojadidi said.

For the Once Upon a Place project, he collected 70 stories from immigrants around New York City.

Of course, that's just a fraction of the 3.3 million immigrants who call New York City home and make up nearly 40 percent of the city's population.

The installation also lets participants who are immigrants share their story. Each booth has a "phone book" that has more information on people in the recordings and lets others write about their own experiences.