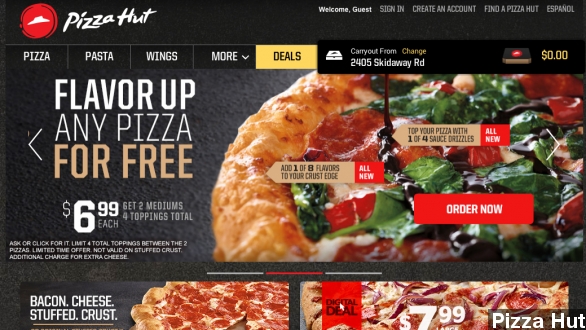 Your favorite Pizza Hut pizza might be getting a face-lift.

Restaurants for the world's largest pizza chain will be experiencing some rebranding of everything from pizzas to logos starting as early as next week, according to the company.

In addition to the new flavor changes and toppings, changes to the company's pizza boxes and website will also soon come out.

A Yum Brands subsidiary, Pizza Hut touts 7,800 locations in the U.S. and an additional 5,500 internationally with a large chunk of those in China.

"It was a division people didn't care about. They cared about KFC in China. Therefore, people kind of took their eye off the ball. Their stock has stopped going down."

But some aren't as optimistic. Pizza Hut sales have been struggling as of late, posting eight straight quarters of sales declines with Domino's and its aggressive ad strategy being one of its biggest competitors.

USA Today quotes Darren Tristano, executive VP of consumer research firm Technomic, as saying: "Pizza Hut may be doing too much too quickly. It would appear that the brand that has lost touch with the consumer is trying to change too much overnight."

It will likely be the last rebranding Pizza Hut will see under current CEO Scott Bergren, who announced he'll be retiring at the end of the year. David Gibbs was named as the company's CEO last week. (Video via Northwestern University)