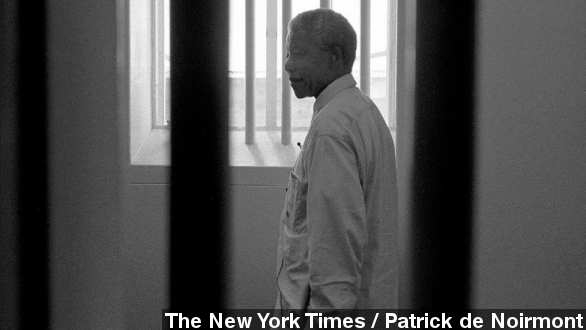 The former South African president and anti-apartheid revolutionary was surrounded by family and friends when he passed away in Johannesburg Thursday afternoon at the age 95. (Via MSNBC)

South African officials announced there will be a private service held for Mandela's family and close friends as well as a state service where heads of state and the public can say their final farewell to the revered figure. (Via CNN)

That memorial service will mark the beginning of a mourning period in South Africa that will last about 10 days.

The service is expected to take place in the Johannesburg soccer stadium, where the 2010 World Cup finals were played. Officials say afterward, Mandela's casket will be taken to Pretoria, the country's administrative capital, where ... (Via YouTube / larbitre)

"His casket will be placed under a dome very close to the place where he took the oath of office when he became South Africa's first democratically elected president in 1994." (Via CNN)

After that, officials say he will be taken to his ancestral hometown, Qunu, which is where he requested his final resting place be.

According to USA Today, President Obama is expected to confirm his attendance to the state funeral service. After Mandela's death Thursday, the president gave a five-minute statement expressing the profound impact the iconic leader had on worldwide democracy. (Via The White House)

President Obama has ordered that U.S. flags be lowered to half-staff through Monday in Mandela's honor.