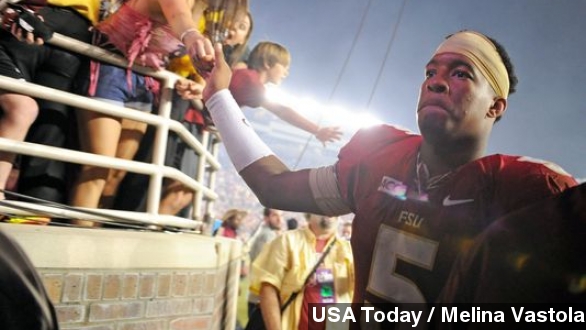 Jameis Winston was accused in a sexual assault case last year. The accuser's family says a detective warned the victim not to press charges.

Florida State quarterback "Famous" Jameis Winston was accused but not charged in a sexual assault case last year. And now, the family of the accuser tells its side of the story about why the alleged victim didn't press charges.

Earlier this month, it was revealed Winston was the suspect in a December 2012 sexual assault case. But the charges against him were dropped when the woman decided not to go through with them. (Via WCTV)

According to police documents, the woman claims Winston assaulted her after she left a bar. (Via Sports Illustrated)

So why didn't she press charges? Well, according to her family's attorney, the detective investigating the case warned her not to.

In a statement obtained by the Tampa Bay Times, the woman's attorney was reportedly told by Florida Detective Scott Angulo "that Tallahassee was a big football town and the victim needs to think long and hard before proceeding against [Winston] because she will be raked over the coals and her life will be made miserable."

The family also told the Times Detective Angulo did not get Winston's DNA, never interviewed his roommate who was a possible witness and never searched Winston's residence. (Via ESPN)

On Tuesday, the Tallahassee Democrat reported police said back in February the case was open but inactive because the woman chose not to pursue it.

Radio host Dan Patrick says this complicated off-the-field situation could have big implications for Winston on the field.

"He hasn't even been questioned yet, but his name is attached to something. ... The voters aren't going to hold this against Florida State, but Heisman voters will hold this against Jameis Winston, in my opinion." (Via NBC Sports)

An attorney for Winston has denied the accusations. FSU plays Idaho Saturday.