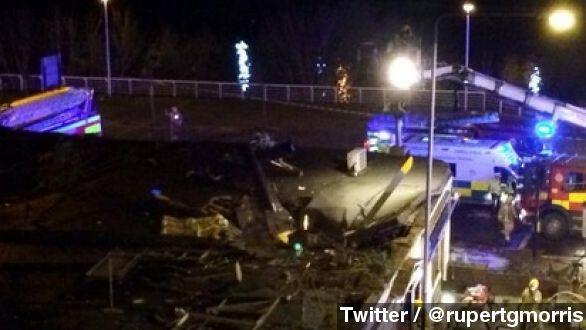 Rescue efforts are underway after a police helicopter crashed into a pub in Glasgow, Scotland, Friday night.

Rescue efforts are underway after a police helicopter crashed into a pub in Glasgow, Scotland, Friday night.

The Scotsman reports the helicopter crashed on the roof of the Clutha bar on Stockwell Street while a live band was playing inside.

Shortly after the crash, video and multiple pictures of the scene were posted on social media, including this Vine.

These pictures tweeted by witnesses also show the helicopter on top of the pub, some of the damage and crowds of people gathered around the scene. (Via Twitter / @scotsscribbler, @rupertgmorris, @Janney_h)

It's unclear how many are injured or what caused the helicopter to go down over the pub.

One witness, Labour Member of Parliament Jim Murphy, said "members of the public formed a human chain to help get people out of the building" and "people were covered in multiple injuries." (Via The Guardian)

​The BBC quotes another witness saying they heard a big boom and then panic as people tried to get out of the club. The BBC also reports at least 15 fire engines responded to the incident.

Again, no word on the number of injuries in the incident.