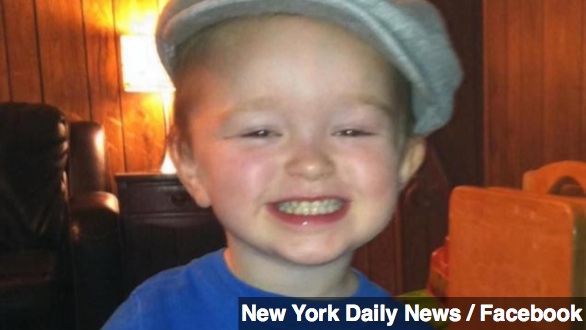 Three-year-old Riley Miller died after a house fire on October 31st. His stepfather had tried to save him, but police stopped him.

Parents in Missouri are both mourning and enraged after their 3-year-old son died in a house fire.

Riley Miller's mother and stepfather were sleeping when a fire broke out in their home. They couldn't get to Riley, so they went out and tried a different entrance. (Via KSDK)

But police told stepfather Ryan going in the house was too dangerous, and stun gun-ed him three times, according to family members. And Riley's aunt can't figure out why police wouldn't help. (Via KDNL)

"How could they be so heartless? They all just stood around and waited for the fire department. What kind of police officer wouldn't try to save a 3-year-old burning in a house?" (Via KHQA)

Officials say the fire likely started in an electrical outlet in the rear of the home. Riley's bedroom was near the front. They say later a firefighter tried to save Riley, but the house was too hot.

The city of Louisiana, Missouri, says this was a judgment call by the officer, and that it expects a lawsuit from the family. It argues the officer was just trying to protect Ryan. (Via Louisiana Press-Journal)

The fire took place on October 31st. Officials say it took eight hours to put out the blaze. The incident is under investigation, but police do not expect foul play in the fire.