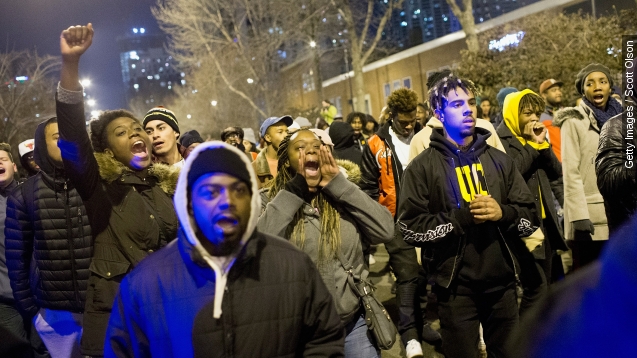 Reports filed the night of the shooting show officers told a different story than what appears to play out in the video.

Jason Van Dyke, the Chicago police officer accused of shooting the teenager 16 times, told investigators McDonald was approaching him with a knife.

Van Dyke said he was "swinging the knife in an aggressive, exaggerated manner" and that he "raised the knife across chest."

Just hours before the dashcam video was released, prosecutors charged Van Dyke with first degree murder. The prosecutor who charged Van Dyke said McDonald was at least 10 feet away and made no aggressive movement toward police. (Video via Chicago Police Department)

The video sparked a round of protests in the city with many, including elected officials, accusing the police department of actively trying to cover up the incident.

"I think that there was a cover-up and people were trying to save their own skin," said Chicago Alderman Howard B. Brookins Jr.