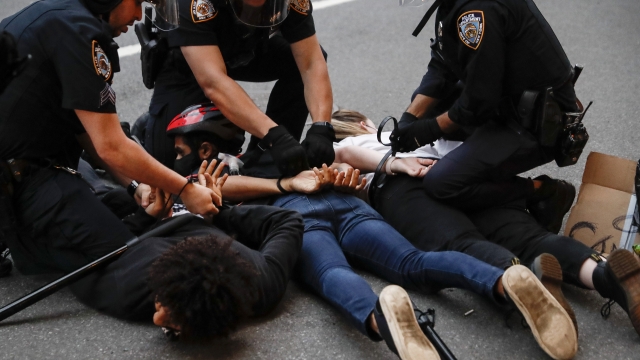 Police training and procedures on chokeholds and restraints are coming under fire.

The officer who knelt on George Floyd's neck is facing felony second-degree murder charges. An officer in Sarasota, Florida, is on administrative leave for kneeling on a man's neck while trying to arrest him for a domestic issue in mid-May. And live TV coverage of recent protests shows some officers using that same technique to arrest suspected looters.

Is kneeling on a subject's neck something officers are trained to do? The experts I spoke with said no.

"The answer is they shouldn't, and shouldn't ever," said Randy Shrewsberry, the executive director of The Institute for Criminal Justice Training Reform.

"So, it is a taught control technique to take an individual down to the ground. … What is not taught, though, is kneeling on somebody's neck," said Dr. Frank Straub, director of the Center for Mass Violence Response Studies at the National Police Foundation.

"There's no reason to put a shin or a leg across the neck of someone you're trying to control in the prone position," said Dr. Michael Schlosser, director of the University of Illinois Police Training Institute.

"Every major police department in the country, in New York, in Boston, in Chicago, in Philadelphia, in Los Angeles, prohibit the chokehold as a matter of policy. But we continue to see it deployed, as well as other neck restraints, such as the knee to the neck that we saw in Minneapolis. That's why we want to prohibit it as a matter of law," said U.S. Rep. Hakeem Jeffries.

Restraint techniques and use-of-force training vary based on state and local rules, but there are nationally accepted policing practices. Deescalation and conversation should come first, but that doesn't always solve the problem.

Officers are trained to use the ground to their advantage, and that includes putting some of their weight on the person they're trying to arrest.

It's normal for officers to be trained to put their knee or shin on the person's upper back, but never their neck, and that weight should only be applied for a short period of time.

"As soon as we get them cuffed, the first thing we say is, 'Are you OK? Can you breathe?' We practice that over and over and over. And if there's any signs of distress, and even if you're uncertain, then you go on the side of caution and you get medical there right away," said Schlosser.

"We talk an awful lot in, you know, the academies that I've been involved in and the states that I've worked, about positional asphyxiation, about excited delirium, about getting a person restrained and then getting them into a position that doesn't impede their their breathing," said Straub.

The experts I spoke to said the mistakes made during George Floyd's arrest should be a teachable moment for current and future law enforcement officials.

"I think as a profession, we have to continue to endeavor to get better, to learn from these incidents and do everything we can to prevent them from from happening going forward," said Straub.