Poll: Republican Belief In Evolution On The Decline 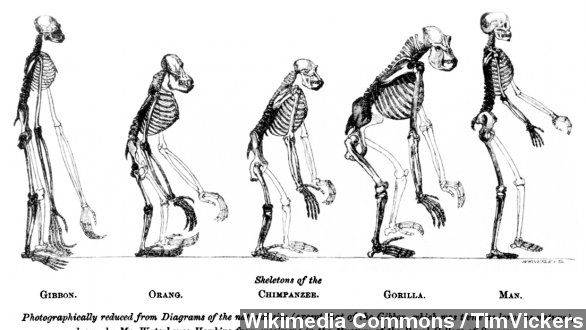 According to a Pew Survey, 67 percent of Democrats and 43 percent of Republicans believe in the theory of evolution.

Partisan splits among Democrats and Republicans aren’t exactly out of the ordinary — but a new poll shows one that’s widened in recent years.

According to a Pew survey released Monday, some 67 percent of Democrats believe in the theory of evolution — compared to 43 percent who believe the theory on the Republican side of the aisle.

According to one of the pollsters, the results were a bit of a surprise. CNN quotes her saying: "I didn't expect to see that kind of shift. I think it basically fits with a pattern of growing polarization. And we see that on some other science issues."

Poll respondents were then asked to self-identify with a political party. Sixty-five percent of Independents said they believed in evolution, by the way. (Via Fox News)

On a broader level, 60 percent of Americans in general say they believe Darwin’s theory, compared to 33 percent who reject the idea. (Via About.com)

While those who believe the more than 150-year-old theory are a solid majority, recent polls have shown American belief in evolution still ranks fairly low in the global community. (Via PBS)

According to a 2005 study of surveys on evolution, the United States ranked second to last in evolution acceptance among 34 Western countries. The only country the U.S. beat out was Turkey. (Via National Geographic)

But the issue of believing or not believing in evolution isn’t as cut and dry as the numbers would have you believe.

The poll also found that of those who believed in evolution, about a quarter said they also believed it was caused by a creator. Meaning they believed a supreme being set the wheels of evolution in motion at some point in the past. (Via NASA)