Pompeo Calls Out China On Anniversary Of Tiananmen Square Massacre 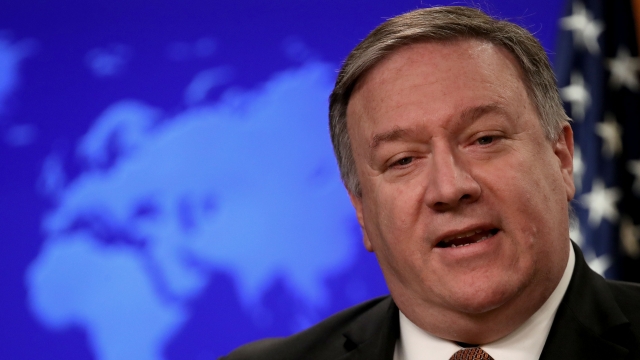 In a statement on Monday, Pompeo praised "the heroic protest movement of the Chinese people" in 1989 and condemned the government's decision to "[send] tanks into Tiananmen Square to violently repress peaceful demonstrations calling for democracy, human rights, and an end to rampant corruption." He also expressed his condolences to the families who lost loved ones during the incident, saying, "The events ... still stir our conscience, and the conscience of freedom-loving people around the world."

Pompeo also said the U.S. hoped "China's integration into the international system" since then "would lead to a more open, tolerant society," but that the Chinese people "have been subjected to a new wave of abuses." He accused China of trying to "stamp out the Islamic faith," in part by detaining over 1 million Muslims, and of attempting to "strangle" the culture of the Uighur people, an ethnic minority.

He urged Beijing to publicly name all of the people killed or missing in the Tienanmen Square massacre and to "release all those held for seeking to exercise these rights and freedoms, halt the use of arbitrary detention, and reverse counterproductive policies that conflate terrorism with religious and political expression."

Pompeo's remarks came shortly after China's defense minister said the government's violent response to the protests was the right move, arguing it helped bring "stability" to the country during a politically turbulent time. China has yet to release an official death toll in the crackdown, but estimates from human rights groups and witnesses range from several hundred to several thousand people.