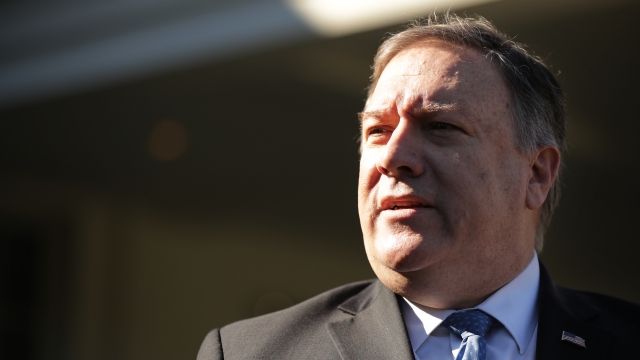 Representatives from the U.K., Germany and France were also in Brussels Monday.

Secretary of State Mike Pompeo is skipping a planned visit to Moscow. Instead, he took a trip to Brussels "to discuss recent threatening actions and statements" from Iran.

The State Department spokesperson announced the decision early Monday. Representatives from the U.K., Germany and France were also in Brussels Monday.

Tensions between the U.S. and Iran are high right now. The U.S. announced last week that it was going to deploy an aircraft carrier strike group and bombers to the Middle East in response to "troubling and escalatory indications and warnings" from Iran. In a short statement, national security adviser John Bolton said the deployment would "send a clear and unmistakable message to the Iranian regime that any attack on United States interests or on those of our allies will be met with unrelenting force."

The U.S. will also reportedly deploy a battery of defense missiles and a warship to the Middle East. Also last week, Iran said it would stop complying with some parts of the 2015 Iran nuclear deal.

President Hassan Rouhani gave the remaining parties in the agreement 60 days to help reduce pressure put on Iran by U.S. oil and banking sanctions. If they don't, Rouhani said Iran will "suspend compliance with the uranium enrichment limits" imposed by the deal.

The EU later rejected that ultimatum but reiterated that it is still fully committed to the preservation and full implementation of the deal.

Although the Moscow trip is canceled, Pompeo is still set to meet with Russian President Vladimir Putin in Sochi Tuesday to have "frank discussions" on a number of issues, including arms control, North Korea and Iran.