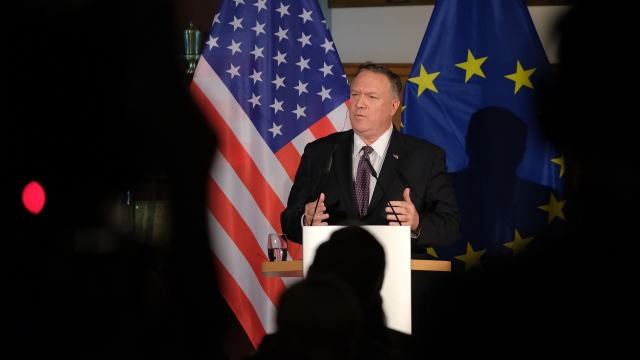 Pompeo talked to Giuliani on the phone at least twice at the end of March.

Around 100 pages of internal State Department documents show Secretary of State Mike Pompeo and President Donald Trump's personal attorney Rudy Giuliani were in contact as the lawyer was urging Ukraine to investigate the Bidens.

The documents were released on Friday as part of a lawsuit filed by ethics watchdog American Oversight.

They include emails that show Pompeo talked to Giuliani on the phone at least twice at the end of March. That's about a month before the then-U.S. Ambassador to Ukraine Marie Yovanovitch was removed from her post.

The documents also include a letter to Undersecretary of State for Political Affairs David Hale from former ambassadors to Ukraine expressing concern about attacks on Yovanovitch.

Yovanovitch said she was removed from her post after a concerted effort led by Giuliani. She said it was based on false assumptions and was a "smear campaign."

Giuliani told The Wall Street Journal on Saturday that he called Pompeo "to describe his concerns" about the ambassador. He also said that he sent Pompeo a nine-page document of "allegations of impropriety" against Yovanovich in between the two calls. Giuliani said after the second call, Pompeo turned the documents over to the State Department's inspector general to investigate.