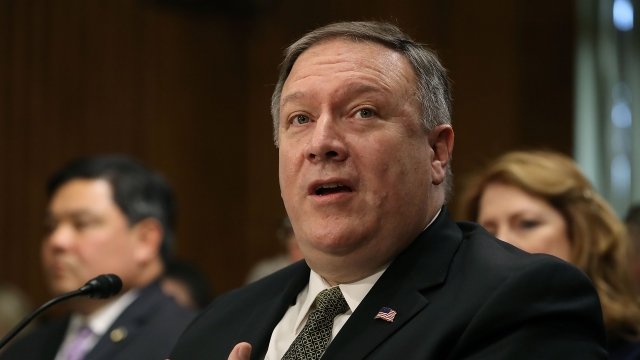 President Donald Trump set a May 12 deadline for other parties in the deal to address what he sees as its flaws.

After a NATO meeting of foreign ministers in Brussels, Pompeo told reporters that without a "substantial fix" to the "flaws of the deal," Trump wouldn't recertify it by the May deadline.

U.S. law requires Trump to recertify the agreement every few months. He set the May 12 deadline to give the U.S. and Europe time to address what he sees as issues with the nuclear deal.

The Obama-era deal relieves Iran of billions of dollars in sanctions provided it curbs its nuclear program. Trump says his biggest issues with the deal are that it doesn't cover Iran's ballistic missile program or regional activities and that some of the clauses in the deal expire.

What Happens If Trump Pulls Out Of The Iran Nuclear Deal?

President Donald Trump says he's pulling out of the Iran nuclear deal. So, what happens next?

Trump has repeatedly criticized the deal. In a meeting with French President Emmanuel Macron earlier this week, Trump called the deal "insane" and said it should never have been made. In response, Macron said the U.S.' changing positions on big international issues are "insane."

Despite the suggestions Trump will likely leave the Iran nuclear deal, Pompeo said "there's been no decision made."