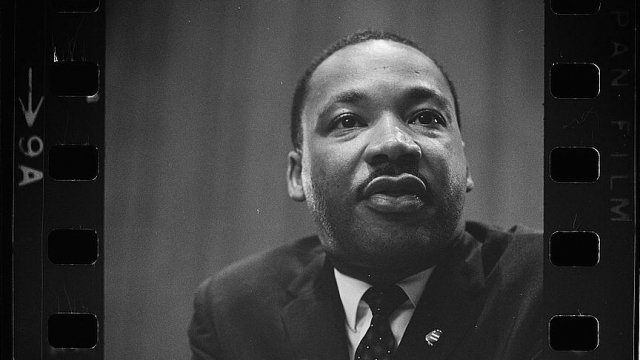 Faith leaders and organizers are reviving the 50-year-old campaign to refocus the nation's attention on the poor and disenfranchised.

Fifty years ago, Martin Luther King Jr. and the Southern Christian Leadership Conference planned to march on Washington to demand economic justice for poor people in the U.S. — his final crusade.

Ahead of the original Poor People's Campaign, King shared with reporters a handful of demands, which included better jobs and housing for Americans below the poverty line. Rev. Jesse Jackson helped lead the effort after King was assassinated in 1968.

"We were preparing to go to Washington, if he had lived, and get into civil disobedience," Jackson said. "Tie up traffic and force the Congress to deal with us and our quest to shift resources from Vietnam back to America, from killing back to healing. That was our plan. We didn't do that, but we did have a Resurrection City, a camp, where thousands could sleep in the mud at night, as it were, to put a focus on working poor people."

Fifty years later, faith-leaders and organizers have revived the Poor People's Campaign in an attempt to address King's unfinished business. The latest iteration of the Poor People's Campaign is like the original in that it seeks to refocus the nation's attention on the most vulnerable. Protesters staged demonstrations in D.C. and at state capitals across the country Monday.

According to a progress report from the D.C.-based Institute for Policy Studies, King's demands went unmet and, in 50 years, things have gotten worse. The report points to issues like increased policing, voter suppression laws and states preventing the passage of minimum wage laws.

This time around, Revs. William Barber II and Liz Theoharis, campaign co-chairs, are highlighting the prevalence of poverty. According to one measure of poverty from the Census Bureau, 140 million people were poor or low-income in 2016. That number is higher than the Census Bureau's Official Poverty Measure — 12.7 percent, or 40.6 million people — which only includes income.

The Mental Cost Of Poverty: How Being Poor Leads To Poor Decisions

Research shows poverty can have a profound effect on how you think as well as your decision-making.

Organizers have presented an agenda with more than 40 demands, including "an end to racist gerrymandering and redistricting," "a clear and just immigration system that strengthens our democracy through the broad participation of everyone in this country" and "the immediate implementation of federal and state living wage laws that are commensurate for the 21st century economy."

This agenda covers a lot of ground, which raises the question: How many of these demands can be addressed? Organizers of the revived campaign think King's original five demands were unmet.

The Poor People's Campaign will continue with 40 days of protests, but Rev. Barber told the Los Angeles Times that this campaign is meant to last much longer: "We're building a multi-year campaign. Our goal is not to stay in D.C. until the change comes. It is to come to D.C., demand that the change must come, and then build a movement that continues to build state by state and in D.C."