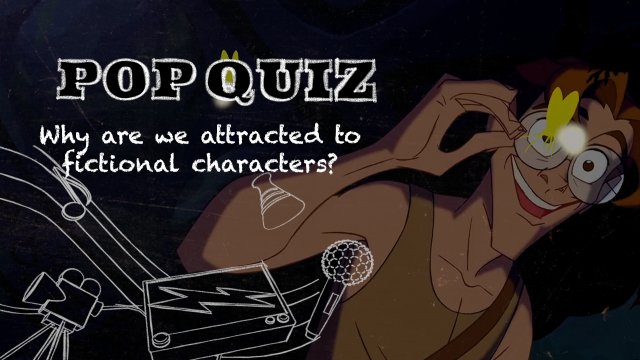 In 1955, a woman by the pseudonym of "Miss A" wrote in asking for advice about a crush.

The response was: "I don't know what you learned in college, but you are flunking the course of common sense. You have fallen for a piece of celluloid as unreal as a picture on the wall."

One year later, that advice column was published again in an academic paper that coined the phrase "parasocial relationship," which was defined as a "seeming face-to-face relationship between spectator and performer."

Parasocial relationships have also been characterized as one-sided and basically imaginary, but they feel real, because as an audience member or a reader, we're spending a lot of time with them.

They have since been the focus of around 250 empirical studies over the past seven decades, and most of them analyze audience relationships with real life media figures: like TV personalities, actors, musicians, or, in more recent years, social media influencers. And some studies have looked specifically at fans of celebrities like Justin Bieber or Elvis Presley. Fun fact: there are still more than 600 active fan clubs dedicated to Elvis Presley.

On a neurological level, we do know that the human brain is pretty good at experiencing imagined stimuli as if they were real. One study found that the auditory cortex in the brain can light up both when hearing a sound and when imagining that sound.

So, it's not a huge leap to suggest these fictional or "imagined" parasocial crushes might feel like the real thing.

Fewer studies have been conducted on parasocial relationships with fictional characters; but the ones that exist have looked at anime characters, sitcoms like "Modern Family,"  readers of the "Twilight" series and, specifically, everyone who had a crush on the fictional vampire Edward Cullen.

'This Is Us' Is Over: Why Audience GriefÂ Can Feel So Real

The tear-jerker TV series, "This Is Us," has come to an end, and so has the relationship some viewers felt with the characters.

In a survey of around 240 women, 44% said the series had no real influence on them, and that it was all just fantasy. But 31% said the series showed them "the type of true love and strong commitment they would like to have in their own romantic relationship."

Researchers have described parasocial relationships as identity-forming, allowing "adolescents to crystallize their beliefs, preferences and expectations."

Many researchers do note that parasocial relationships can lead to unrealistic expectations for real-life relationships, but others also saw them as "placeholders" for actual relationships that allowed people to romantically experiment.

Another real-world example of a parasocial relationship is when a man named Akihiko Kondo held an unofficial wedding ceremony to marry the holographic pop star Hatsune Miku. The marriage is not actually legally recognized, but it's one of many around the world.

Skeptics can look at this as an example of something keeping him from making real-life relationships. In an interview with the New York Times, Kondo says he's aware of how strange people think his attraction is. And while he knows that Hatsune Miku isn't real, his feelings are — and he says he was able to pull himself out of depression and find a sense of love and solace because of it.

All of that goes to show that parasocial relationships with fictional characters can, and do have real-world impacts.

Companies have long capitalized on the appeal of parasocial relationships. And video games take this one step further, especially when you look at the entire genre of dating Sims, where players can virtually date fictional characters.

Dating Sims have made an estimated $570 million across several platforms. "Stardew Valley" is one of the most popular ones, letting players date and marry from a pool of 12 fictional characters. And as of this spring, the game has sold over 20 million copies.

The fandoms surrounding these games really confirm a lot of the past studies done on parasocial relationships. Players have described them as venues for escapism that provide a sense of autonomy and emotional safety, and that is especially true for queer gamers.

One person told Huffpost: "I get to live through the experience of not being seen as weird or an outcast for being 'different' in my gender identity and sexuality."

It seems that our emotional attachments to fiction and pop culture are very real and can even have a purpose from giving us ways to form our emotional identities, providing venues for emotional escapism, as well as a way to explore and feel a real sense of love.