Pop Quiz: How Does The Military Control Its Hollywood Image? 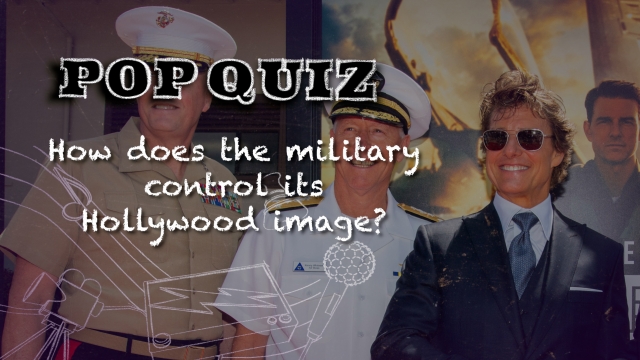 In this segment of "Pop Quiz," Newsy's "In The Loop" dives into the military's relationship and influence with Hollywood movie studios.

The long-awaited "Top Gun: Maverick" premieres May 27 — 36 years after the original movie.

There was a sequel in the works back in the early 90s after the original movie was a massive hit, but Paramount shelved it because the U.S. Navy didn't want it to happen, putting it on hold for decades.

This situation highlights the U.S. military's long and complex history with Hollywood and points to their closer partnership than one might think.

Today's "Pop Quiz" question asks: How does the military control its Hollywood image?

The relationship between Hollywood and the U.S. military goes back as far as the early 1900s with air shows, or movies, about World War I. The first best picture winner, the 1927 film, “Wings,” featured military equipment and thousands of infantrymen as extras.

Things started to get more official after World War II, when the Department of Defense established its film liaison office — primarily to work with film and TV producers in order to manage the military’s image through entertainment. That relationship continues today: The DoD will assist productions at a steeply discounted rate, as long as they get some say in how they’ll look on screen.

"So essentially when a filmmaker comes to the military and says, 'You know, we are interested in using your equipment; we are interesting in partnering with you,' the Pentagon will say, 'Sounds promising, but let me see your script,'" said Tricia Jenkins, a professor of film, TV and digital media at Texas Christian University. "And they will go through the script and literally read it line by line, making notes, saying, 'We don't like the way the military looks on page 16. If you want our tank, you're going to have to change page 16.'"

"We've uncovered perhaps 2,500 different movies and TV shows, and that's just the TV titles," said Tom Secker, investigative journalist and co-producer of “Theaters of War.” "So, that should give you a sense that it isn't just a war movie here, a documentary there. It's everything from sci-fi to reality TV to game shows to sporting events. Literally every aspect of entertainment culture that you can think of at some point will have been assisted and aided by the military."

Although the DoD might not widely advertise this relationship, it’s not a secret. They usually emphasize the intention is to help with accuracy or be educational, and their level of control over the story may be downplayed.

Take "Jurassic Park III" for example: After reviewing the script, a couple of the requests from the Pentagon involved not using their A-10 aircraft against flying dinosaurs because they might make the audience pity them and asked if they could have a “nice military rescue” at the end. The studio agreed, and the Marines show up.

So, are these requests about accuracy? Maybe not, but they sure do make the U.S. military look good.

As the DoD’s liaison wrote in one memo, there are actually three main criteria that earn the military’s support: Is it authentic? Does it inform the public? And, does it help with recruitment and retention?

"So the U.S. does not have compulsory military service," Jenkins said. "We operate on a volunteer basis, and obviously joining the military, especially during wartime, can be a dangerous occupation. So one of the ways that they work to build recruits is essentially to use Hollywood movies and to glamorize soldiers and military service and the excitement of combat, while at the same time downplaying its psychological and physical cost."

Paramount's blockbuster hit premiered in 1986, which Time Magazine called at the time, “a 110-minute commercial for the Navy.” It was so effective as a recruitment tool that the military set up information and sign-up tables in movie theaters. Applications to the Navy’s flying program skyrocketed by 500% after the film, and even the Air Force — which isn’t actually related to the movie — got a big boost.

"And then 'Top Gun' comes along, which is a very different kind of film because there's virtually no combat in it, there's virtually no fighting," Secker said. "But almost every character in the film is from the military, and so this was a bonanza for them. In their own documents, they said it rehabilitated the military's image, which had been savaged by the Vietnam War."

The 80s and 90s were a hugely successful time for the military-Hollywood partnership. A few years after "Top Gun," Paramount Pictures offered to run an ad for the Navy at the start of every VHS tape for "The Hunt For Red October" and "Flight of the Intruder." In an assessment from the military's go-to commercial production house, one VP noted, “...to add a recruiting commercial onto the head of what is already a two-hour recruiting commercial is redundant.”

Now, let’s remember that the Pentagon’s involvement in Hollywood wasn’t just about glamorizing the military; it was also about minimizing the more unsavory topics, and sometimes even damage control.

Certain topics, so-called “showstoppers,” will immediately get a rejection for Pentagon support, like veteran suicide, veterans with mental health problems or addictions, abuse from superiors or sexual harassment and assault.

This is part of the reason why "Top Gun: Maverick" has actually taken decades to finally get produced. A few years after the original movie, the military was embroiled in a massive sexual assault case known as the Tailhook Scandal. The congressional investigation even flagged "Top Gun" as a possible influence for its depiction of sexual relationships in the film. The Pentagon stepped in to stop the sequel from happening, out of fear that people would associate the franchise with the scandal.

Because the cost of filmmaking can be prohibitively expensive without DoD support, scores of films have never been made. For example, after the Pentagon denied support for a big-budget action movie "Countermeasures," the team even turned to the Spanish Navy to try and request an aircraft carrier, which was essential to the plot. But after hearing that the Pentagon refused them, the Spanish Navy also declined.

It’s important to also remember what context you might be viewing something in, especially because its messaging can have massive consequences.

"The U.S. military wants to convince people that militarized violence is usually the best answer or the best solution to world problems, and that the U.S. military is always a benevolent force in world affairs and that its violence is always righteous," Jenkins said. "And again, that sort of helps to normalize war and leads us to decisions that have a big cost to them."

So while all these movies and shows are essentially some sort of military propaganda, plenty of things in media are technically “propaganda,” since they have some sort of message they want to show to people.

What matters while watching movies like "Top Gun" is understanding how much influence the military has over the story you’re seeing and the messages it’s giving. It can be great when art and media have something to say, but when that messaging is dishonest, not from a clear source, or has massive cultural and geopolitical consequences, then it’s important to view that messaging with a more critical eye.