Pop Quiz: Who Makes Money When You Stream A Song Online? 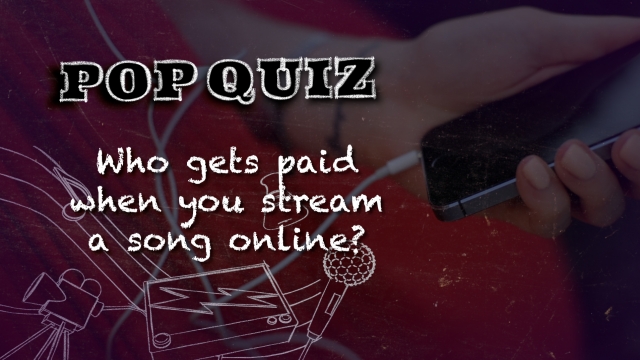 Streaming has become increasingly popular in the music industry, but it's also changed how those in the industry get paid.

How most people listen to music today probably isn't how they listened to it a decade ago.

Streaming platforms like Spotify, Tidal or Apple Music have made it easier than ever to listen to and discover music, but they have also disrupted how people in the music industry make money.

Today's "Pop Quiz" question: Who gets paid when you stream a song online?

The answers to this question run through the seedy age of music piracy to today's headlines about artists like Bruce Springsteen and Stevie Nicks selling their music catalogs for millions of dollars.

To start off, let's break down what happens when a user actually hits play.

Whenever a listener streams a song online, royalties are paid out to several different parties: music publishers, songwriters, performers and record labels, which do negotiate their rates.

Apple Music says it pays around a penny per stream, but Spotify pays by "streamshare."

"There's going to be more and more revenue attached to streaming, and the number of streaming users is supposed to triple in the next five to 10 years," said Terry Johnson, chief revenue and strategy officer at Generational Group.

It sounds like a lot of money for the music industry as a whole, but how much money the actual artists are making, especially in comparison to the olden days of album sales, is where the frustration seems to begin.

"Previously, if you bought a record or CD, or you downloaded a song, that was a one time purchase, and the artists got paid big lumps, or you know, a relatively larger lump sum payment all at once," said Liz Moody, an entertainment lawyer.

"What happens with streaming, though, is it's paid out over every time you play the music. So, there isn't this, generally, especially for smaller artists, there isn't a big initial lump sum payment; it's more of an annuity where they get paid over time."

Moody said artists could see larger payouts over the long run than they would with traditional album sales, but that can still be frustrating for newer, smaller musicians because they won't see that money right away.

Now, part of the reason the industry got here is because for a while, a significant amount of people weren't paying for music at all.

"The reason a lot of these companies were started — Spotify, Pandora — they were started because they wanted to help out artists, right, to find another way for artists to get their music out there to combat piracy that was happening at the time, so it shouldn't always be maybe this us versus them," Moody said.

"When it first started becoming a thing, it's like, so I can just listen to, like, I pay a monthly fee, and I can just listen to whatever as many times as I want?" said Tristan Bushman, a Nashville-based musician. "It's opened up the world of just, you can just put on a playlist and discover 10 or 12 new artists."

So streaming did solve an issue, but the disruption of companies like Spotify has led to other problems."

Musicians on Spotify don't get any money from their streams until they’re reaching like thousands and thousands of streams," said Jennifer Femme, a Chicago-based musician. "It’s really frustrating to be working so hard to build up the amount of streaming you're having and to not see any compensation for that."

Taylor Swift boycotted Spotify in the past for unfairly paying artists, and other bands like Belly, Letters to Cleo and Eve 6 have voiced their own concerns about pay.

Spotify reportedly pays some of the lowest rates to musicians out of all of the streaming platforms, likely because of its sharestream system, so musicians have been vocal about the fact that they can’t survive on streaming alone."

Making money off of people listening to music is almost impossible currently," Bushman said. "I think it's kind of unfair for small artists," Femme said.

This coupled with the fact that it takes a lot more work now for musicians to stand out from the noise of the internet in order to be discovered almost forces musicians to do much of their own promotional and marketing work to attract an audience.

"It's almost essential for an artist to have a good social media campaign and team behind them," Moody said.

"That's unfortunately just the way it is when you’re getting started," Femme said.

With that marketing work, they have to also critically think about their digital presence, financial plans and even the value of their overall works or catalogs.

"They have options, and probably a lot more options than they had in the past," Johnson said. "Over 5 billion [dollars] in catalog value changed hands last year; It's probably going to be more this year."

For all of the frustrations streaming has caused for musicians, it's also significantly increased the commercial value of music overall — especially for private equity investors who now see music as a recurring revenue source that can be counted on for years.

Because of that, more artists are considering selling their music catalogs as a way to finance their careers and avoid waiting for streaming royalties overall.

Experts say it's a musicians' market, but like everything else impacted by streaming, the payout is going to take a bit more work.