Pop Quiz: Why Aren't There Many Thanksgiving Movies? 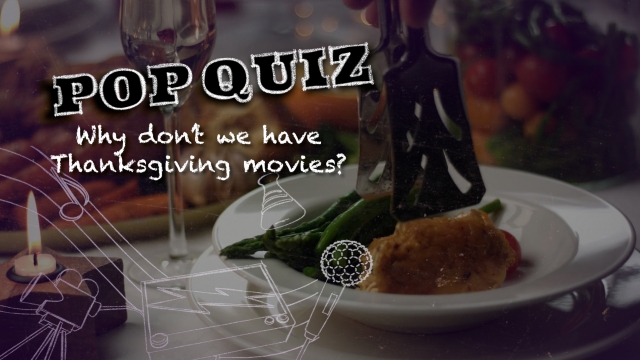 In this segment of "Pop Quiz," Newsy's "In The Loop" explores why there are so many Christmas movies and not many surrounding Turkey Day.

After all the spooky Halloween festivities, Thanksgiving is now just around the corner.

With the holiday looming comes some fan-favorite Thanksgiving specials reairing on TV. There are Turkey Day episodes of "Friends," "Gilmore Girls" and "A Charlie Brown Thanksgiving" to name a few.

While there are tons of Thanksgiving episodes on TV, there aren't many Thanksgiving movies, even though it's one of the most popular holidays in the U.S.

So what does that say about the way the entertainment industry mythologizes and commercializes holidays?

When looking at Christmas movies, the idea really grew into its own Hollywood feature film genre in the early 20th century — its Golden Age. A-listers starred in classics like Bing Crosby in "White Christmas" or Jimmy Stewart in "It's A Wonderful Life." "Miracle on 34th Street" was released in June instead of the holidays since it was the peak of movie attendance, and studio executives weren't confident in the success of a holiday-themed movie yet. Its marketing materials barely even mentioned Christmas at all.

But Christmas gave filmmakers the opportunity to make stories geared for adults and associate a range of narrative themes with the Christmas canon beyond Christian ideals, such as community, faith, redemption, or a rejection of materialism.

Here's An Official List Of Stores Closed On Thanksgiving 2022

If you like to start your holiday shopping right after Thanksgiving dinner, check this list to see if your favorite stores will be closed this year.

Christmas also has a cast of folkloric characters, many of whom were a perfect fit for children's media in the era of broadcast TV specials.

Another reason Christmas might be a better choice for Hollywood is its international appeal. The three highest grossing Christmas movies made just over half a billion dollars overseas, and that's not counting unofficial Christmas movies.

Thanksgiving, by comparison, doesn't have a cute cast of characters in the same way. It's also based on the controversial mythos around the Pilgrims sharing a harvest with the Wampanoag Tribe in 1621. That story doesn't have a happy ending. Not even two decades later, and the relationship between the Wampanoag tribe and the settlers had fallen apart. The pilgrims began a war with their neighbors, massacring the tribes over the next couple of decades.

That's why Thanksgiving is also a national day of mourning for some in the United States — not prime material for movies meant to make viewers feel warm and cheery. Movies focused on the holiday might also lack international appeal, since the holiday is so U.S.-centric.

Thanksgiving was officiated by former President Abraham Lincoln during the Civil War after a dedicated lobbying campaign from Sarah Hale – an editor of a women's magazine who wanted to promote the celebration of women in domestic life. Lincoln really wanted to homogenize an American identity, especially one rooted in the history of the Northern states.

Retailers are trying to get rid of inventory that has piled up during the pandemic, all as shoppers reduce spending.

Lastly, instead of bright "Christmas cheer," Thanksgiving has a reputation for family dysfunction and yelling with relatives, with many saying those arguments are about politics.

However, a joint study from the Associated Press and University of Chicago found that only 9% of American parents with kids reported having a holiday gathering ruined by fights over politics. But a different study in 2016, which looked at Thanksgiving dinners specifically, found a pretty amusing data point. Dinners where the hosts and guests lived in voting precincts with different political leanings were up to 50 minutes shorter than those with the same political leanings.

Robert Thompson, who teaches pop culture at Syracuse University, theorized that this family dynamic might be why Thanksgiving episodes are so common in TV but not in movies. Family dysfunction, squabbling and miscommunication make the holiday ripe for sitcoms in particular.

The holiday also has TV-centric traditions — like watching football games or the broadcast for the Macy's Thanksgiving Day Parade. The parade ironically began as a Christmas event to signal the start of the shopping season, despite the date. Over time, it was renamed for Thanksgiving Day.

It may not be the fit for the big screen, but it's at least one example of Turkey Day reclaiming the spotlight from its holiday rival.