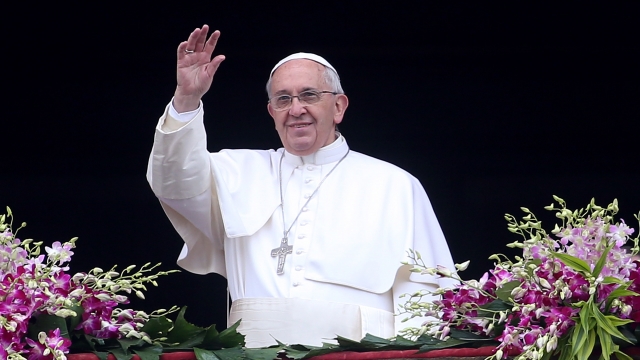 The Vatican published remarks Pope Francis made about gender. He said it's terrible that children are being taught they can choose their gender.

Pope Francis is known as one of the most progressive popes, but he apparently has his limits.

The Vatican published some closed-door remarks from the pope where he touched on gender identity. Francis said he was dismayed by the growing acceptance of transgender people, calling it "terrible."

He said, in part, "Today, in schools they are teaching this to children — to children! — that everyone can choose their gender."

Francis railed against what he called "ideological colonizing" in "very influential countries." He blamed textbooks financed by wealthy people and institutions for the societal changes, though he declined to specifically name any countries, people or institutions.

Though he clearly doesn't approve of every letter, Francis has by far been the most LGBTQ-friendly pope in recent memory. He's also been more open to women in the church.

When asked about homosexuality, Francis said, "Who am I to judge?" He also said he was open to divorcees who remarry without an annulment to receive communion. But he still officially opposes divorce and same-sex marriage.

The pope's remarks drew criticism from rights groups. As spokeswoman for The Human Rights Campaign said, "It is deeply [disappointing] that so soon after his healing apology to LGBTQ Catholics regarding their treatment the church, Pope Francis would choose to deny the very humanity of transgender people, including children."

This video includes clips from Centro Televisivo Vaticano and images from Getty Images.