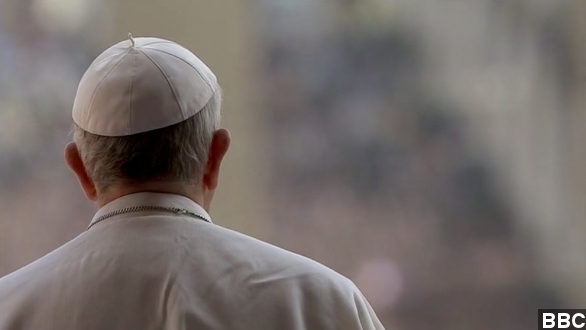 Turns out Pope Francis has a lot to say about the global economy. And it might surprise you.

Tuesday, eight months into his papacy, Francis issued his first “apostolic exhortation,” laying out his vision for his time as pope. But it's what he said about free markets that’s made headlines. (Via BBC)

He writes: “Some people continue to defend trickle-down theories which assume that economic growth, encouraged by a free market, will inevitably succeed in bringing about greater justice and inclusiveness in the world. This opinion, which has never been confirmed by the facts, expresses a crude and naive trust in the goodness of those wielding economic power.” (Via Vatican.Va)

In the 223-page document, the pope also criticizes an “economy of exclusion and inequality” and asks how it’s not newsworthy when an elderly person dies, “but it is news when the stock market loses two points?” (Via Euronews)

Needless to say, the leader of the Catholic church bashing free market principles and “trickle-down economics” is being understood by many writers as an attack on modern conservative theories.

The Atlantic’s Emma Green writes, Francis has essentially declared a new enemy for the Catholic Church: capitalism. And she says it seems the pope had the U.S. and United Kingdom especially in mind with the use of the words “trickle-down” — perhaps a reference to the ideas of Ronald Reagan and Margaret Thatcher. (Via CNN)

All this is especially notable considering the church’s largely conservative following in the U.S., more in line with Ayn Rand than Karl Marx.

Not that the pope’s views make him a Marxist. The Washington Post describes him as a “populist” — placing a larger focus on helping the poor than his predecessors did.