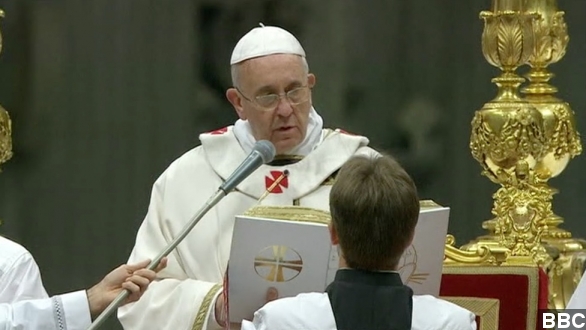 In his Christmas Eve message, the pontiff focused on Jesus' humble beginnings, as detailed in the Christian Bible.

The pope led his first Christmas Mass at the Vatican Tuesday evening. And because it is Pope Francis, it's no surprise his message was one of humility and forgiveness.

Broadcast on the BBC, across Europe, the Americas and throughout the world, the pope focused on Jesus' birth as detailed in the Bible — and the humble beginnings of the Christian prophet.

To highlight his emphasis on humility this Christmas, Pope Francis carried the Jesus statue used in the Vatican's nativity scene himself. It's usually carried by an aide to the pope. (Via Sky News)

His efforts to remold the church in a softer, more inclusive image are part of the reason Pope Francis was named Time Magazine's Person of the Year this month.

The pontiff just turned 77 last week, but remember he's not even the oldest living pope.

That distinction belongs to 86-year-old Pope Benedict, who Francis visited Monday, marking the first time in modern history two popes had exchanged Christmas greetings. Benedict is the first pontiff to step down in 600 years. (Via The Guardian)

Tuesday's ceremony is Pope Francis' only public Christmas Mass this year, though he will deliver a message from his balcony above St. Peter's Square on Wednesday.