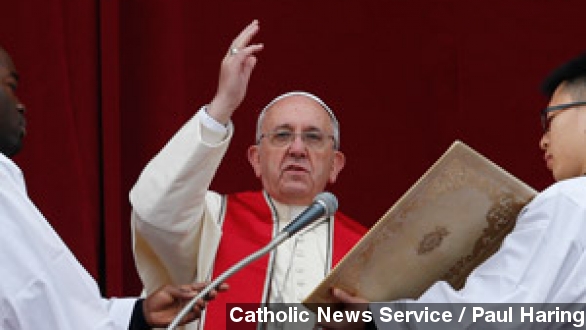 During his Christmas Day address, Pope Francis urged a crowd of thousands to pray for peace in the world's war-stricken countries.

Peace on Earth was the message in Pope Francis's first Christmas Day blessing.

Speaking from the balcony of St. Peter's basilica, Pope Francis urged a crowd of about 70,000 people to pray for peace in the world's war-torn nations like South Sudan, Iraq, and Syria. (Via Vatican)

"Let us never lose the courage of prayer, the courage to say, 'Lord, grant your peace to Syria, and to the whole world.'" (Via BBC)

The pope's message also touched on the plights of migrant workers, the victims of human trafficking and child abuse, and those affected by Typhoon Haiyan's catastrophic rampage in the Philippines. (Via The Telegraph)

Many onlookers moved by the pontiff's speech noted Pope Francis took a tone of humility in his address.

"He really seems humble, he seems like he's different and wants to make a change."

"He's very dedicated to the humble origins he has and to representing the poor." (Via NBC)

Pope Francis preached a similar message during his Christmas Eve Mass. In another display of humility he placed the baby Jesus statue in the Vatican's nativity scene himself, rather than leaving the task for an aide. (Via Sky News)