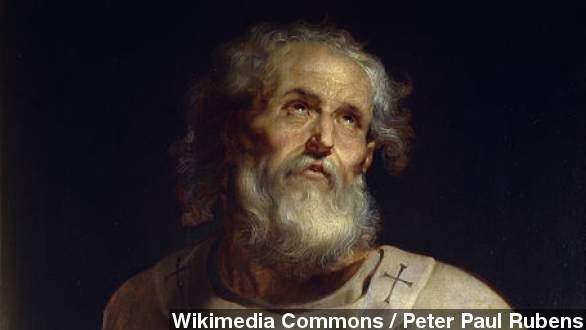 The historic move comes almost 75 years after the remains were first dug up during an archaeological dig at St. Peter's Basilica.

In a historic move Sunday, Pope Francis publicly displayed what are believed to be bone fragments from St. Peter for the first time since they were discovered almost 75 years ago.

Pope Francis brought out the case holding the relics and later displayed them at Mass Sunday. The remains thought to be those of the man recognized as the first pope were actually discovered during an archaeological dig at St. Peter's Basilica back in 1939. (Via HLN)

It wasn't until almost 30 years later when Pope Paul VI publicly said the fragments were identified as St. Peter's "in a manner which we believe convincing." (Via Examiner)

Convincing, but not completely sure. That's because researchers weren't able to completely confirm they were from St. Peter. (Via KABC)

ANCHOR: "Some Vatican archaeologists don't believe the bones are really those of the apostle. No papal leader has ever definitively declared the remains belonged to St. Peter." (Via WVUE)

Whether the fragments are St. Peter's remains a mystery, but CNN reports it's widely believed the first pope was crucified in the year 64 A.D. and was buried in Vatican City.

The bone fragments that were displayed Sunday are normally held in an urn inside the Vatican.