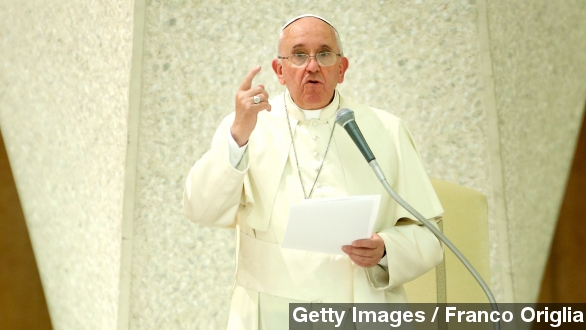 The pope is coming to the U.S.! Francis confirms his first ever visit is planned for the fall of next year. But why has he waited until now?

Pope Francis is officially coming to the United States next year for his first ever visit to the country as pope and a lot of people are very excited.

EUSTACE MITA VIA WPVI: "We're excited beyond belief, and just so happy that the pope confirmed this morning."

That's despite the fact the pope's visit — attending the World Meeting of Families in Philadelphia — has been pretty widely expected within the church since this past summer. (Video via The Vatican)

Late July saw headlines like this one from The Washington Post, attributing the information to an American archbishop, while the Los Angeles Times flat out said Pope Francis would be coming next fall.

And the organizers of the event were already planning on a papal visit.

EUSTACE MITA VIA WCAU: "Initially it was planned that he might be in a stadium but we said, 'this is the pope of the people' ... We wouldn't be surprised if we saw upwards of two million people for the mass on that Sunday."

The mass is set to be held on the Benjamin Franklin Parkway, which runs through the middle of the city and hosted the last pope to visit Philadelphia — when John Paul II held mass there in 1979. (Video via KYW-TV)

The pope appears to have had his eyes on the U.S. recently as well, commenting on one issue pulled straight from the headlines.

In a speech on Saturday, Pope Francis lumped in euthanasia with abortion and stem cell research as a sin against god, calling it an act of "false compassion." (Video via Rome Reports)

That seemed particularly timely, given the assisted suicide earlier this month of American "death with dignity" activist Brittany Maynard. (Video via CBS)

The rest of the pope's itinerary isn't clear, but according to a Vatican representative he will also be visiting New York City.