Pope Francis Won't Attend Spiritual Retreat Due To A Cold 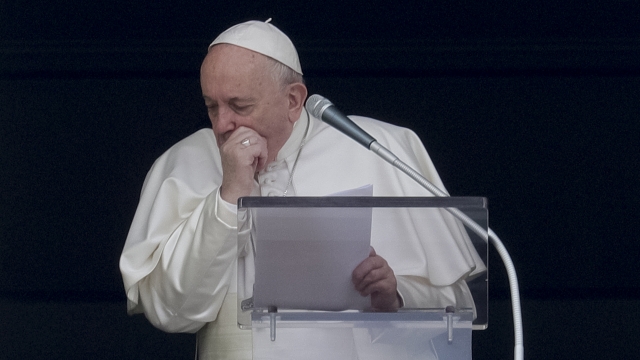 The pope was seen coughing during his weekly public address at the Vatican Sunday.

Pope Francis announced he won't be attending a spiritual retreat this week as he continues to battle a cold.

The pope was seen coughing during his weekly public address at the Vatican Sunday. He announced he would be skipping a weeklong Lenten retreat outside of Rome to recover.

It will mark the first time he has missed the retreat in his seven-year papacy.

He told the crowd, "unfortunately a cold prevents me from participating this year. I will be following the meditation from here."

The Vatican has only described the pope's sickness as "a slight illness." It comes as Italy faces a spike in coronavirus cases and deaths. The U.S. issued a level three travel advisory urging Americans to reconsider travel to the country due to the coronavirus outbreak.

The outbreak also caused the Vatican to reschedule the Economy of Francis, a conference for young people around the world in the Italian city of Assisi and was scheduled for March 26-28. The conference will now take place in November.