Pope Pledges Justice For Abuse Victims, But Some Unconvinced 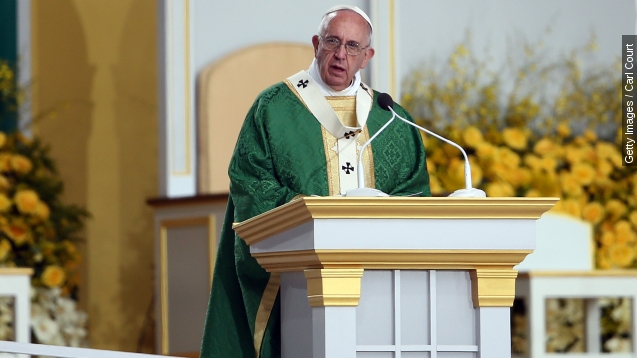 Pope Francis' comments on clergy sexual abuse Sunday were met with criticism by some who say his talk was merely a PR move.

Pope Francis ended his first trip to America by meeting with victims of clergy sexual abuse and promising all responsible would be held accountable.

"God weeps for the sexual abuse of children. These can not been maintained in secret," the Pope said Sunday.

But the pope's comments on Sunday have been criticized by some as a mere public relations move. Earlier during his visit, Pope Francis upset advocates of sexual abuse survivors when he praised American Catholics for "courage" and a "generous commitment to bring healing to victims." (Video via NBC,MSNBC)

Survivor advocate Barbara Dorris said she disagrees with the pope, saying, "Almost without exception, they have shown cowardice and callousness and continue to do so now." (Video via The Telegraph)

Pope Francis has tackled the sensitive issue before: back in a 2014 homily, he apologized to the sexual abuse survivors and asked for forgiveness.

"I beg your forgiveness also for the sins of omission on the part of church leaders who did not respond adequately to reports of abuse made by family members," Pope Francis said.

In June of this year, Pope Francis announced a tribunal would judge bishops who don't protect kids from sexual abuse in the church. There's been no word yet on when that tribunal will start.

The pope headed back to the Vatican shortly after his Sunday mass.