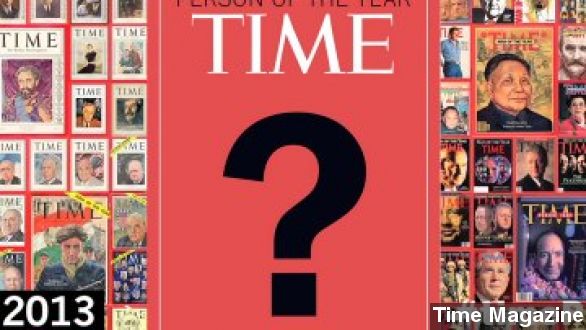 ​Time managing editor Nancy Gibbs announced Monday the magazine's shortlist for 2013's "Person Of The Year," as well as the criteria for making the cut.

"It's the person who's had the most impact on events in the news this year for better or worse ... it has to be someone whose impact is on the news that we have lived through this year." (Via NBC)

Gibbs noted that does disqualify Nelson Mandela. The magazine does not highlight figures who have passed away.

Other political figures still in contention include Hassan Rouhani, President of Iran. (Via Al Jazeera)

Also, Kathleen Sebelius, the U.S. Secretary of Health and Human Services. (Via C-SPAN)

WHSV has more of the nominees —

"Some of them have surprised some people. The list includes Bashar Assad, the President of Syria, Senator Ted Cruz of Texas who rose to fame during shut down talks and believe it or not, Miley Cyrus." (Via WHSV)

USA Today noted that she is still very much in the running for the top spot this year, highlighting Gibb's explanation of her nomination.

"Power is not just political. It can be cultural ... At a time when you're living with an explosion of exhibitionism since we all now carry cameras with us at all times, she is a symbol of the way we live."

Time is not shy about including divisive figures. Adolf Hitler was 1938's Person Of The Year and Osama bin Laden was in the running in 2001.

Other nominees for this year include Jeff Bezos of Amazon, Edward Snowden, Pope Francis, gay rights activist Edith Windsor and President Obama, who's no stranger to the list.

"Obama was Person of the Year in 2008 and 2012. He is the only person who appeared on last year’s short list to make this year’s. His predecessor in the White House, Franklin D. Roosevelt, is the only person to receive the title three times."

In a poll on the magazine's website, readers recently selected Egypt’s General Abdul Fattah al-Sisi as their Person of the Year. He's actually not on the magazine's official short list. The decision will be announced Wednesday.