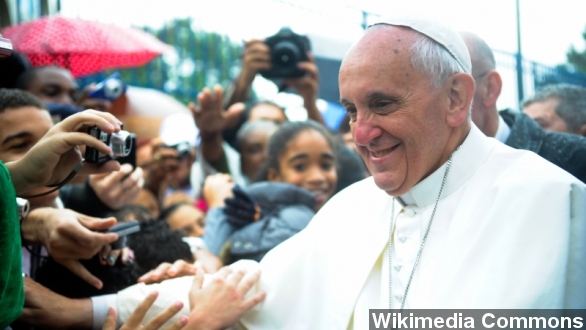 Pope Francis continues his outreach to all corners of the Catholic faith with a survey for modern families.

Pope Francis continues his somewhat radical papacy by reaching out to the modern family and in a twist asking the bishops of the world what he should do.

The Vatican sent a survey to Catholic parishes around the world to find out how they are dealing with issues such as gay marriage, divorce and premarital cohabitation. (Via YouTube / Vatican)

Some of the questions...

- What pastoral attention can be given to people who live in these types of [same-sex] union?

- Do [the divorced and remarried] feel marginalized or suffer from the impossibility of receiving the sacraments?

- In the case of unions of persons of the same sex who have adopted children, what can be done pastorally in light of transmitting the faith?

Many believe this survey is in preparation for a global meeting of bishops to be held in October of next year, but NBC notes that doesn't make the survey any less surprising.

"Vatican watchers say Francis' polling attempt is extraordinary on two levels: first, because it seeks input from rank-and-file Roman Catholics and second, because it touches on issues that might have been considered off-limits in past papacies."

This is just one of many instances where Pope Francis has made headlines for his progressive moves. In his first long-form interview he said the Catholic Church needs to stop being "obsessed" with "small-minded rules." ​(Via Rome Reports)

Despite the Pope's progressive leadership, no one believes he will change the Catholic Church's basic doctrine ...

The survey has been posted online so that anyone, including non-Catholics can respond.