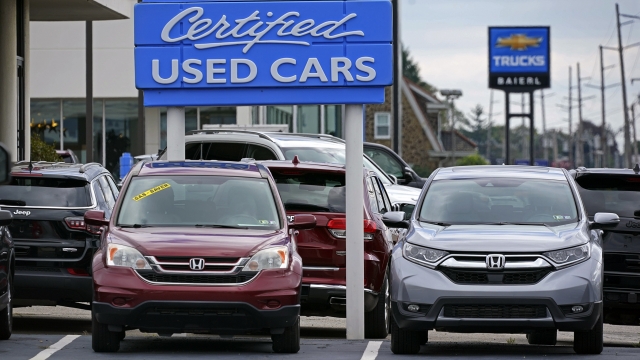 Prices of used cars and trucks are dropping, according to the latest government data, but a new report says some popular models once considered "affordable" are now anything but.

Robbie Marx is looking for a used van and said one he was looking at for $16,900 will probably sell fast.

"When you do find them, they are gone," he said.

"With limited supplies and higher new car prices, that pushes more people back into that preowned market, keeping demand up," he said.

The site iSeeCars.com recently looked at affordable used-car options, comparing 2019 prices to 2022 prices of three-year-old cars in good condition. It found 33 vehicles no longer meet its "affordable" threshold, including:

Other cars on its less-affordable list include the Jeep Wrangler, Ford Edge and Chevy Traverse.

Getting more electric vehicles on the roads is a key part of President Joe Biden’s plan to fight off the worst effects of climate change.

"All these cars that you wouldn't think of as special, unique, expensive cars are technically becoming non-affordable," he said.

In many cases these days, the price of a used two- or three-year-old car can rival the price of a brand-new version of the exact same car. In some cases, you might be better off buying a new vehicle if you can find one and there is no markup or surcharge placed on it.

And with fewer new cars on the lot, iSeeCars said many shoppers are forced to buy five-, six-, even 10-year-old models.

"Maybe they're also putting less money down or they're making a longer loan, taking out a longer loan on a used car," Brauer said.

Worse, Heflin is not expecting many three-year-old lease trade-ins this spring, because three years ago, we were all in COVID lockdown.

"We're not seeing those lease returns coming back in right now," he said.

Some hope for the future

So what can buyers do? Heflin says don't be afraid of a higher-mileage car if the CARFAX report shows it has been well maintained and is accident-free.

He also suggests you get to know a local salesperson who can be on the lookout for used cars coming into their dealership.

One bright spot: December's Consumer Price Index shows that used-car prices are down 2.5% compared to November.

Experts say if car demand drops in 2023, prices should ease a bit.

The history of our pursuit of a flying car

What if you never had to worry about sitting in bumper-to-bumper traffic? Flying cars present that opportunity — but they’re not a reality yet.