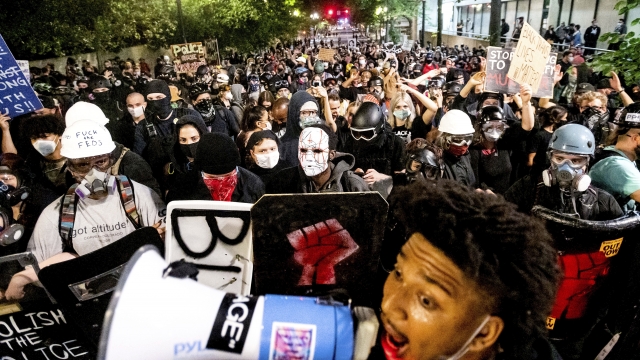 Police in Portland, Oregon declared an unlawful assembly outside a police precinct Saturday night — the first clash between protesters and police in days.

Portland Police tweeted: "People in this unlawful assembly have thrown glass bottles at Portland Police and directed lasers at them. Anyone who does not disperse may be subject to force or arrest." One officer was hit in the head and police could be seen charging multiple times at protesters in the area.

Meanwhile, another gathering at a federal courthouse remained peaceful.

Last week, the federal government and Oregon state officials made a deal to reduce the number of U.S. agents on the ground. State and local police took over, but have been seemingly hands-off. Protests in the past few days have been relatively uneventful, dispersing on their own with chanting and conversation.

A county sheriff captain told reporters earlier on Saturday that his officers were there to support the right to peacefully protest.

He said, "And we want to make sure we engage with that and show that they have the ability to do that and that they can be safe, that we can do that in a manner that is non-violent. And that's been going on for the last two nights. We very much appreciate that from the protesters."

President Trump has been pushing for more aggressive action from local law enforcement, threatening to send in the National Guard. Acting Homeland Security chief Chad Wolf says federal officers are waiting in Portland until he feels "assured the courthouse is safe and secure."