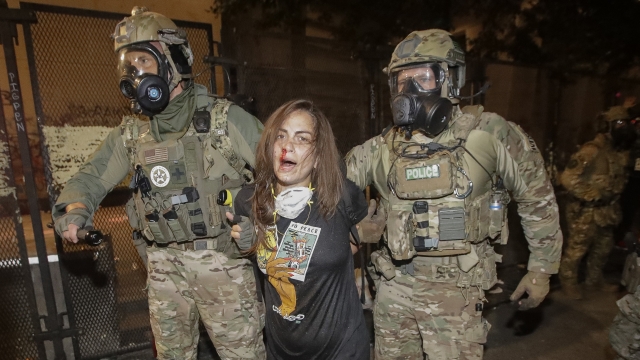 After more than 60 nights of protests, the showdown continues on the streets of Portland, Oregon, and now, increasingly, in the courts.

The nonprofit group Protect Democracy is suing the U.S. Department of Homeland Security and multiple federal police agencies on behalf of activist groups including Wall of Moms and Don't Shoot Portland.

But the Trump administration is planning to send more officers to the city. The Washington Post reports more U.S. Marshals were dispatched last week and that police reinforcements from Customs and Border Protection may soon be on the way.

He accused protesters and advocates of mischaracterizing the situation and said, "Anyone who tells you otherwise is willfully ignoring the facts or lying."

Portland Mayor Ted Wheeler has demanded an audience with Homeland Security officials to (quote) "discuss a cease-fire and removal of heightened federal forces from Portland." The mayor was hit by tear gas during a protest last week.

One Portland man described the aftermath from a recent night of protests and gas.

"The mask I've worn for one night is so saturated with tear gas that if I exhale hard enough, you can see, like, a cloud of smoke come out of it. That's, that's pepper and tear gas saturated through my mask."

U.S. Rep. Earl Blumenauer of Oregon says the Trump administration's crackdown has only worsened unrest on the streets. He's worried things (quote) "will get even more out of hand ... because it doesn't take much of spark when you've got these extremes."