A U.K.-U.S. Trade Deal Is Harder Than It Sounds, Even After Brexit 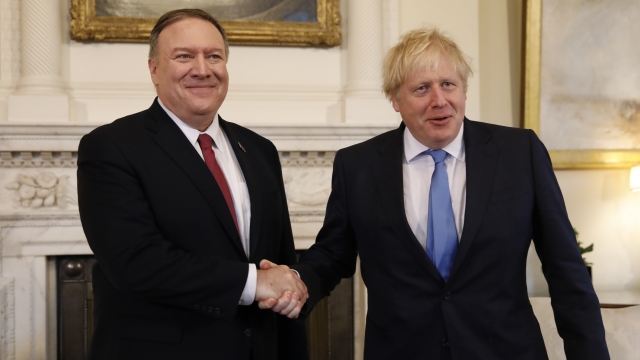 The U.K. is now free to start negotiating a trade deal with the U.S. — but actually working out the details of that deal is easier said than done.

Now that the U.K. has formally left the European Union, it's free to strike new trade deals with other countries. And officials in both the U.K. and the U.S. are talking up the prospect of a new trans-Atlantic trade agreement.

U.S. Secretary of State Mike Pompeo told reporters, "I think you'll stare at this day and this year as we look in the rearview mirror five or 10 years from now, and you will see the enormous benefits that accrued to both of our nations as a result of this."

But despite the much-vaunted "special relationship," reaching a U.S.-U.K. trade deal isn't as simple as it sounds.

Garrett Martin, the co-director of the Transatlantic Policy Center at American University, told Newsy, "I think in recent years, it's not been an easy period between London and Washington, as this has been a difficult period between the United States and its European counterparts in general."

"Donald Trump and his administration have tried to weaponize trade, they've tried to make connections between trade and other elements of the partnership."

The Trump administration has reportedly threatened to level tariffs against U.K. auto imports on at least two separate occasions over the country's positions on digital tax laws and Iran's nuclear program.

And there are plenty of other issues that could prompt trade retaliation as well. The U.K.'s recent decision to allow Chinese tech firm Huawei to construct parts of the country's new 5G network drew sharp rebukes from the U.S.

And the U.K. can't make too many trade promises to the U.S. until it sorts out what its future relationship with the EU will be like. EU countries count for just under half of the U.K.'s trade — but better access to the bloc comes with more binding rules and regulations.

Martin said: "If they diverged too much from the EU to conform to American practices, that will facilitate the trade agreement with the U.S. But it will affect trade access to the EU single market. So the U.K. is very much caught between a rock and a hard place."

Trade negotiations will have to cover a lot of thorny ground: Pharmaceuticals and food safety regulations are two potential hot-button issues for those talks. But government officials are still outwardly optimistic that they can strike a deal.

U.K. Foreign Secretary Dominic Raab told reporters: "Of course there's going to be difficult issues. The British negotiators are going to be rigorous and robust; we know that the Americans are. But I think we should go into this with some optimism, some ambition, some can-do spirit. And I do think a deal can be done."