Postal Service Warns That Delays Could Keep Ballots From Being Counted 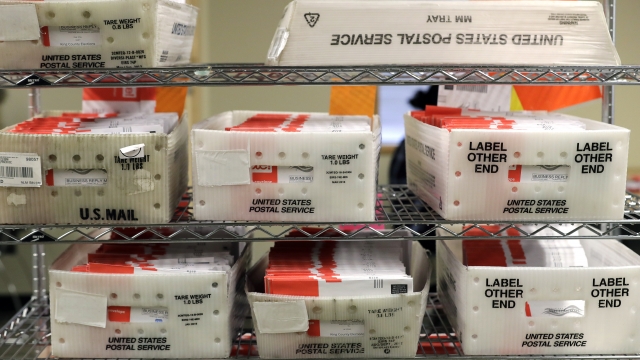 Private services like UPS and FedEx can't pick up slack due to the required postmark, which only the Postal Service can provide.

The U.S. Postal Service has warned 46 states and Washington D.C. that it can't guarantee mail-in ballots for the November election will arrive at elections offices in time to be counted, even if voters mail them by state deadlines.

Some have called for private services such as UPS and FedEx to step in to get the ballots delivered on time, but those services say only the post office has the lawful postmarking status required to validate the votes.

Last week, in a letter to Democratic lawmakers, the Postal Service signaled it is shifting or removing equipment to maximize efficiency. Dozens of Democrats sent a letter to the new Postmaster General, urging him not to take any actions that slow delivery and hurt Americans' ability to cast ballots in November.

The Postal Service said Friday it'll stop removing letter collection boxes from the streets in Western states until after the election. Photographs circulating online have shown trucks packing up mailboxes without advance notice in at least four states.

President Donald Trump has claimed Democrats are pushing for universal mail-in voting, while making an unsubstantiated charge of voter fraud. He told Fox News Thursday that funding the post office in anticipation of the election is a major sticking point for another economic relief package for the coronavirus pandemic.