What Would Happen If The US Left NATO? 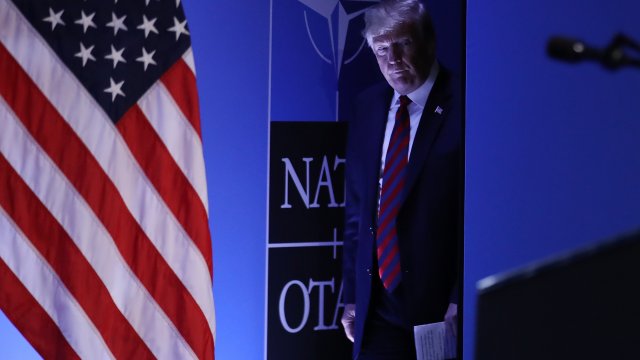 President Trump has leveled plenty of criticism against NATO during his time in office. Although he eventually backtracked on his criticism, a new report that the president discussed withdrawing from the alliance multiple times last year puts things on a whole other level.

"If Trump did withdraw from NATO, either de facto — that is to say pull the troops out — or de jure — that is to say cancel the legal commitment that the United States has to defend its allies — everybody would basically say that the order of the world that took form during World War II has come to an end, and it would," said Charles Kupchan, senior fellow at the Council on Foreign relations and former special assistant to the president for national security affairs. "It would constitute an irreparable breach in the relationship between the United States and Europe."

The treaty that formed NATO, a military alliance between 29 nations in North America and Europe, does give countries the ability to opt out of it. But President Trump can't just unilaterally withdraw from NATO like he did with the Iran nuclear deal or the Paris climate accord — he's also going to need approval from a very skeptical Congress.

"One of the few things you will find agreement on is the importance of NATO and the transatlantic alliance. So I do think that regardless of the technical and legal issues, if Trump were to head down this road there would be an enormous pushback from the House and from the Senate," Kupchan said.

Part of that pushback would undoubtedly regard Russia. The relationship between NATO and Russia has been sour since 2014 over the country's annexation of Crimea. With strained relations on top of an ongoing President Trump-Russia investigation, some experts worry that a U.S. withdrawal would be a win for Russian President Vladimir Putin.