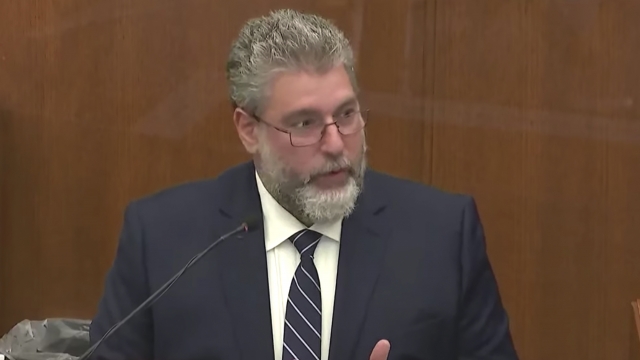 The trial of a Minnesota police officer charged in the shooting death of Daunte Wright opened its second week of testimony on Monday with an assistant medical examiner telling jurors that the gunshot wound was not survivable and caused Wright's death.

Wright, 20, was killed on April 11 after being pulled over in the Minneapolis suburb of Brooklyn Center for having expired license plate tags and an air freshener hanging from his rearview mirror. The officer who shot him, Kim Potter, is charged with manslaughter.

Potter, a 26-year police veteran who resigned two days after the shooting, said she meant to draw her Taser to stop Wright after he pulled away and got back in his car as officers tried to arrest him on a warrant for a weapons charge. Potter, 49, is white and Wright was Black. His death, which came while Derek Chauvin was on trial in nearby Minneapolis in George Floyd's death, set off several nights of angry protests in Brooklyn Center.

Dr. Lorren Jackson, an assistant Hennepin County medical examiner, testified Monday that the gunshot wound causing injuries to Wright's heart and lungs is what caused his death. He said with these injuries, one can survive "seconds to minutes."

"Far and away the gunshot wound to the chest was the most significant injury," he said during testimony in which he walked jurors through Wright's autopsy.

After Wright was shot, his car drove away and collided seconds later with an oncoming car. Any injuries from the crash were insignificant in terms of what caused Wright's death, Jackson said.

Jackson testified that Wright had some cannabinoids, or THC and its metabolites, in his blood from smoking marijuana, but that they didn't factor in his cause of death. Under cross-examination, he testified that the level of THC metabolites in Wright's blood was "on the high end" of numbers he sees, but was still within a normal range for people who use marijuana.

Jurors were shown graphic images of Wright's body at the scene, as the assistant medical examiner found the body on the ground, with some medical equipment still attached from lifesaving efforts, and some dried blood from the gunshot wound.

They also saw autopsy photos, which Judge Regina Chu limited after Potter's attorneys objected earlier in the trial. Wright's mother, who has been present for much of the testimony, was not in court as the autopsy photos were shown.

Jurors also heard testimony from a Bureau of Criminal Apprehension forensic scientist who recovered a cartridge case from the front driver's seat of the vehicle. Jurors were shown a picture of the car's interior, with the driver's seat smeared in blood.

The state is expected to rest its case midweek.

The state filed two motions Monday, including one designed to limit the opinion of witnesses who are not testifying as experts.

The request came after a witness called by the state, former Brooklyn Center police Sgt. Mychal Johnson, testified on cross-examination Friday that Potter's actions were authorized under state law. Johnson was not testifying as an expert on the police use of force, but as a law enforcement officer who was at the traffic stop.

Prosecutors filed a second motion seeking permission to question police officers about union membership. They wrote that Potter had roles in the union, including as president, which gave her an elevated level of respect among her coworkers. Prosecutors say they should be allowed to ask officers about this so that jurors can use the information to assess the witnesses' credibility and potential bias toward Potter.

Prosecutors spent the first week of testimony showing jurors police video of the traffic stop, in which an officer in training, Anthony Luckey, took the lead under Potter's guidance.

The video showed the critical moments where Wright pulled away as Luckey was on the verge of handcuffing him, followed by Potter shouting "I'll tase you!" and "Taser, Taser, Taser!" and then shooting him once with her handgun.

The defense has called the shooting a horrific mistake, but has also asserted that Potter would have been within her rights to used deadly force on Wright because he might have dragged Johnson with his car.

The case is being heard by a mostly white jury.

State sentencing guidelines call for just over seven years in prison upon conviction of first-degree manslaughter and four years for second-degree, though prosecutors have said they plan to push for even longer sentences.