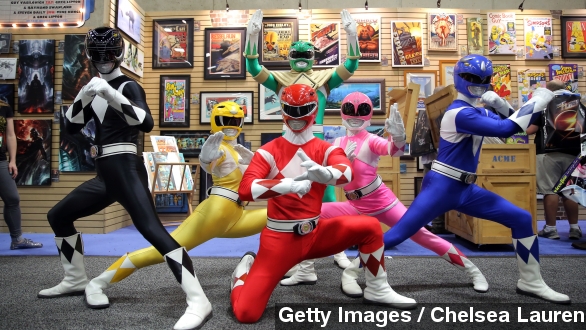 The copyright holder for the Power Rangers has reversed course on a fan film, allowing it to remain online.

The Power/Rangers fan film is back online after briefly being taken down Thursday.

The owners of the copyright, Saban Entertainment, ordered the film to be taken down for copyright infringement — but it seems that they have worked out a deal with the fan film's makers.

Copyright legality aside, having the film taken down might not have been the best move for Saban. The film was being distributed for free so it isn't like Saban was losing out on any money.

And even though Power Rangers might still be popular with kids, the short film drew some attention for adults who grew up with the show.

Which could be great for the company seeing as a big-budget live action reboot is coming from Lionsgate in 2016.

Cheesy fan films are common but most don't get takedown orders from copyright holders.

So what was it about the Power Rangers film that bugged the original creators so much?

And the original Green Ranger, Jason David Frank, was a bit turned off by all the excess violence and cursing in a franchise created for children.

"I'm just a PG-13 guy. The cuss words, the drugs, it just doesn't fly with me," Frank said on his Facebook page.

To be fair, this is a fan film in name only. The crew clearly spent a lot of money trying to make this look like an authentic Hollywood project.

It stars a well-known actor like James Van Der Beek and has effects that look put together by Hollywood professionals.

Digital Trends even writes, "It's so well-made, one could make an argument that it’s actually competing with — and over-shadowing — the main brand."

But it's hard to argue a 15-minute YouTube video could compete with two decades worth of television programming and feature films — even if one of them starred a villain named Ivan Ooze.