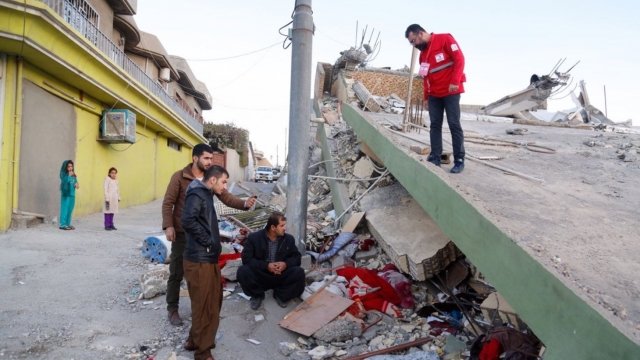 Iran's state-run news agency says more than 430 people are dead and thousands more are injured after a 7.3-magnitude earthquake struck near the border of Iraq and Iran late Sunday.

The Islamic Republic News Agency says the worst damage appears to be in the cities of Kermanshah, Qasr-e Sharin and Sarpol-e Zahab.

The U.S. Geological Survey reported it was a shallow earthquake, hitting about 14 miles below the surface. It injured more than 7,000 people.

It displaced ten times that amount. At least 70,000 people were in need of shelter as of Monday afternoon. A spokesperson for the Iranian Red Crescent told CNN the quake damaged more than 500 villages.

How The Strongest Earthquakes Can Rewrite Our Maps

When the shaking and tsunamis subside, the coastline can look a bit different.

Heating and energy is an urgent concern. Thousands of people slept outside in frigid temperatures over the weekend, and Al Jazeera notes the quake prompted Iran to shut off a nearby gas plant for safety.

The Red Crescent says close to 174 rescue teams have responded with medical supplies, tents and blankets.

Turkey was one of the first countries to respond.

Early Monday, Iraq's prime minister tweeted that he had "instructed Civil Defense teams and health and aid agencies to do all that they can to provide assistance to our citizens affected by yesterday's earthquake."

Iran sits on multiple fault lines and is prone to earthquakes. The deadliest this century was in 2003, when a 6.6-magnitude earthquake killed tens of thousands of people in the southeastern part of the country.