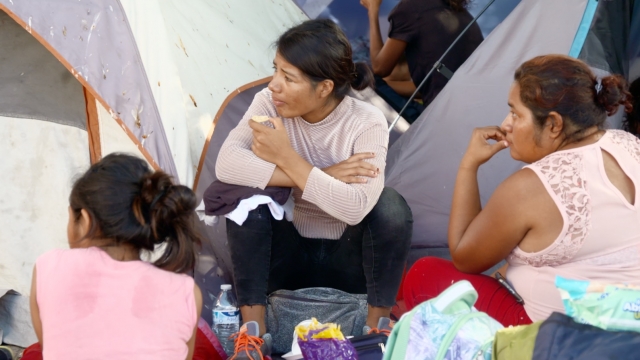 A union representing asylum officers tells Newsy DHS is forcing pregnant migrants to wait in Mexico so that they don't give birth in the U.S.

Border agents have turned away a "significant number" of pregnant asylum-seekers, exposing them to "rape, kidnapping [and] assault" in dangerous border towns. That's according to the ACLU, a group of Democratic Senators and National CIS Council 119 — a union representing nearly 14,000 USCIS workers, including asylum officers. The union's spokesperson told Newsy in an exclusive interview how he believes the administration is forcing late-term pregnant migrants to wait out their asylum cases in Mexico because it doesn't want them to give birth to American children.

"We have reason to believe that CBP's reasons for doing that is they don't want the individual to give birth to a child on American soil, because that would then create a new American citizen. This is very troubling."

Michael Knowles speaks on behalf of 600 asylum officers who screen migrants and determine whether they qualify for exemption from being returned to Mexico. But Knowles told Newsy that CBP directors have denied requests from asylum officers to exempt late-term pregnant women. That's despite the fact that CBP's own guidelines say it should exempt migrants with "known physical or mental health issues."

"Those individuals are being returned to a situation where they have little to no access to health care in precarious circumstances."

Under a fast-expanding program known as "Remain in Mexico," the Trump administration is forcing 50,000 Latin American migrants — and counting — to wait in Mexico for months until the resolution of their asylum cases. The White House says having asylum applicants wait outside the U.S. ensures they don't "become fugitives." But immigrant advocates say the policy forces vulnerable migrants — including pregnant women — to live in the streets for months at the mercy of Mexican cartels. The administration does exempt unaccompanied minors and other categories of vulnerable migrants from being returned to Mexico.

"There are some exceptions that are supposed to be made by CBP to allow people to remain in the U.S. while waiting for their hearing, for example, if somebody has a serious health condition. The CBP says they don't consider pregnancy to be a serious medical condition."

Civil rights groups say the reasoning may be political, not medical. In a complaint letter to Homeland Security's watchdog, the ACLU says a CBP officer told a pregnant migrant to get an abortion because "Trump didn’t want there to be any more pregnant people here."

A spokesperson for Homeland Security told Newsy by email that CBP agents review "every individual based on the facts before them." Besides, the spokesperson argued, creating a blanket exemption for all pregnant migrants could lead to people abusing the exemption and require the invasive task of "testing every woman for pregnancy versus making assumptions based on appearance."

The ACLU is already suing Homeland Security over its "Remain in Mexico" policy. But while the case proceeds, the civil rights organization is asking the government to "at a minimum ... cease the forced return of pregnant women."