Experts Are Preparing Forests For Wildfires With Purposeful Blazes 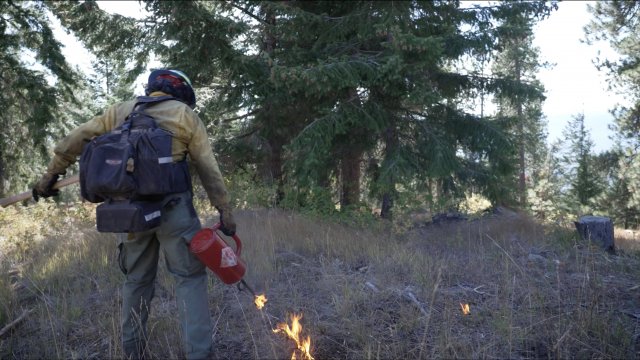 Ecologists and volunteers are prescribing fire in some hard-hit forests to prepare for the next season of extreme conditions.

This past summer, wildfires burned 6.5 million acres, incinerating entire forests. Southern Oregon's Bootleg Fire tore through nearly half a million acres with such intensity it created its own weather.

But something different happened when the fire reached The Nature Conservancy's 30,000-acre Sycan Marsh Preserve: It dropped to the forest floor, and the bigger trees survived.

Steve Rondeau is the Natural Resources director for the Klamath Tribes, a nature conservancy partner in managing the preserve. He showed the difference between green grass and life on one side of a road there and charred trees and dead grass on the other — validating the tree thinning and prescribed burning The Nature Conservancy has been doing since 2005. The goal is to restore the forest's natural ability to survive fire, and it worked.

More and more scientists and forest managers are embracing this approach as a way to save not only these forests from catastrophic fire and climate change but also the countless homes and communities located right in the middle of them.

In the forested hills above Roslyn, Washington, 400 miles north, the work that protected the Sycan Marsh Preserve in Oregon is just beginning. And after more than a century of fire suppression in that western dryland forest, they're in an ecological crisis, which makes efforts like this to restore the forests all the more critical.

Now the sound of chainsaws and machinery fill the forests, but instead of the clear cuts that once decimated them, the logging guided by forest ecologists is designed to heal.

The Nature Conservancy's Washington State Forest Manager Kyle Smith says the restoration work mimics the naturally fire-tolerant state these forests existed in for thousands of years, with Native Americans setting fire to the landscape to promote hunting and wild foods. He says tree thinning is only the first step.

"The forest densities were a lot less than what we have today," Smith said. "Those periodic fires came through on 20-year cycles, and they'd burn a lot of those small trees up. So, what we'd be left with is those fire-tolerant trees, the bigger Douglas Fir and the bigger Ponderosa Pine that have the thick bark to withstand those smaller fires, and then a lot of these smaller shrubs and trees would get burnt up."

Volunteer firefighters and The Nature Conservancy went to a tree-thinning site at the top of the Clay Alum Ridge above Roslyn to intentionally set a fire, as fall in Roslyn means burning season. After a safety briefing, the firefighters went to work using drip torches to coax lines of fire down the mountain.

"What the prescribed fire does ... is it reduces the number of the type of fuel of of stumps, down logs and shrubs in a way that when we're in midsummer in August, very extreme conditions — warm, windy, dry — that it's easier to stop that fire from spreading when we don't want it to spread," Lolley said.

Those uncontrolled summer wildfires are something Roslyn Fire Department's emergency management coordinator, Chris Martin, knows well. He says in 2017, the Jolly Mountain Fire, which exploded into a 37,000-acre megafire, came within just a few miles of Roslyn.

"And a number of us went and stood up on that ridge and looked out at a 17-mile wall of fire coming towards town and thought, well, you know, how do you stop that?" Martin said.

Fortunately, the fire shifted course at the last minute, but that wasn't until after the incident commander told the crew that large portions of Roslyn were indefensible.

"That's when the moment changed, right?" Martin said. "I mean, like, we in technical terms called it a change of underwear moment where it's time to really get boots on the ground and address these issues."

Laura Osiadacz, a volunteer firefighter and county commissioner, says during the fire she went door-to-door telling people they had to evacuate. At the time, her son was 7 years old.

"I went to my son's room because I was taking him to my parents' house so that he wasn't in the midst of all the chaos," Osiadacz said. "And lo and behold, I had noticed his backpack was packed."

Instead of packing clothes, his backpack was filled with photographs and his favorite stuffed animals.

"And that really hit home because as a mother you want to protect your children, and you don't want them to have that kind of fear," Osiadacz said.

Osiadacz says that fire back in 2017 changed the town, and the way it thinks about fire, forever.

"We know that we're at risk, and we know we need to do things to help protect us from that," Osiadacz said.

Back on the fire line, Lolley says support from the community is critical.

"Some people wonder how we're going to get to scale in doing 40 acres at a time, but really what we're doing here today, while we are accomplishing 40 acres of good fire, we are also bringing people together — fire chiefs and local people who have been told their whole life that fire, scary fire is bad, and that we need to put it out," Lolley said.

He says the scale of what's needed to make a difference is enormous. An estimated 80 million acres in the national forests, and nearly 3 million acres in Washington state forests. But with recently passed state legislation funding restoration and prescribed burning on more than a million acres of Washington's highest-risk forests and watersheds, the momentum and political support for bringing good fire back is building.

In Oregon, Steve Rondeau with the Klamath Tribes says it's about time.

"We've suppressed fires for more than 100 years, and that's what's having a major effect on megafires, and there is something we can do about it," Rondeau said. "We can look to the past and learn lessons and take from how they were managed at that time and apply it to the present day and current society so that we can create a better balance."

Rondeau says the Klamath Tribes have a saying — "Heal the land, heal the people" — because in the end, he says, it's the land that takes care of the people.