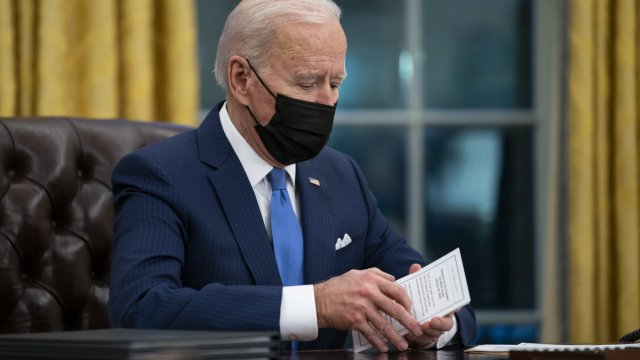 The president is set to address Congress Wednesday to discuss future proposals and his first 100 days in office.

President Biden during his inaugural speech: "Much to repair. Much to restore. Much to heal. Much to build. And much to gain."

President Biden this week marks 100 days in office. New polls show his approval rating is a few points over 50 percent. That’s better than his predecessor Donald Trump but worse than Presidents Obama and Bush at the 100-day mark.

In general, President Biden gets good grades for his handling of the pandemic and government relief….Less support on border immigration issues.

Top Republicans Sunday said the president is leading from the left.

"I think he's been a very destabilizing president," Sen. Lindsey Graham said. "And economically, he's throwing a wet blanket over the recovery, wanting to raise taxes in a large amount and regulate America basically out of business. So I'm not very impressed with the first 100 days. This is not what I thought I would get from Joe Biden."

President Biden is scheduled to address a joint session of Congress Wednesday…though with a smaller in-person audience because of COVID protocols.