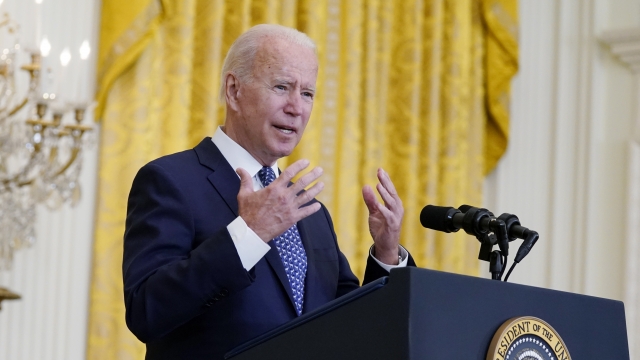 The president celebrated labor unions while addressing the struggling U.S. economy by pushing his $3.5 trillion "build back better" agenda.

A day after the national holiday that recognizes labor and labor unions, President Joe Biden praised the movement for its contributions to increasing the prosperity of American workers.

During his remarks, President Biden paused for a moment of silence to honor the union workers who died during the coronavirus pandemic, as well as the union leaders John Sweeney and Richard Trumka who both died in 2021.

America was built "by the middle class and unions built the middle class," President Biden declared from the White House. It is a phrase he frequently used while campaigning for the presidency.

His comments came a few days after federal unemployment benefits ended for millions of Americans. A key component of that relief was a weekly $300 federal supplement that many out of work had come to rely on.

The Biden administration has said states can use federal relief funds to extend the programs, but so far non have chosen to do so.

President Biden took also the opportunity to push his infrastructure plan. "We're going to build back better. We have to, we must," he said.

The White House is preparing an urgent and populist message for selling President Biden's $3.5 trillion "build back better" agenda, even as House committee leaders begin churning out pieces of the forthcoming measure.

The economy is currently struggling and the U.S. added just 235,000 jobs last month. That's roughly a third of what was expected and it's the smalling hiring increase the U.S. has seen since January.